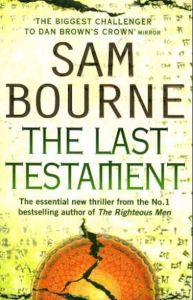 It wasn’t great – even in Danish.

There was a distinct lack of tension, and it didn’t grip me at all. Took practically an eternity to get through, and I only finished it ’cause the library sent me an email saying it’d gotta go back

It’s set in the Middle-East of course, and is connected with Middle-East peace talks. Given that we all know they’ll never have peace down there, not while anyone from either side is alive/believes that their god gave them exclusive rights to the area; it can hardly be expected to generate any tension based on something potentially de-railling the latest round of talks/mud-casting

So, it’s gotta be better in other areas, in tension, in action, in personal relationships, and while it tries, it can’t quite believe enough in itself to pull it off.

Then, the final revelation of what the whole thing turned on, that has been not quite revealled many times previously, was a bit ho-hum, as well. Especially, as it doesn’t take a 5-year-old to tell you that no matter what it is, either side will denounce it as a fake anyway.

I read one of his previous books (in English) The Righteous Men, and as a Dan Brown photocopy, it wasn’t half bad. But this…well, I won’t be rushing to check out any more. Even free from the library.

You can buy The Last Testament from Booksplea.se

One thought on “Review: The Last Testament – Sam Bourne”