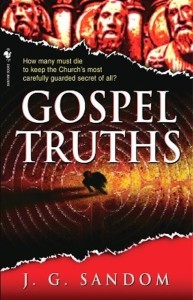 From the cover:
Two thousand years ago a feared and sacred text was buried and protected with a conspiracy of silence and murder…until now.
They have been drawn into a plot more insidious than anything they could have imagined – a battle to control one of religion’s greatest secrets. For English detective Nigel Lyman, it begins with the suspicious suicide of a corrupt Italian banker in London. For French-born Mariane Soury-Fontaine, it starts with the mysterious disappearance of her lover. And for American mathematician Joseph Koster, the search leads through France’s soaring cathedrals to the baffling labyrinths that masons once carefully inscribed in their floors.
These strangers are about to crack a code that dozens have died for, a puzzle whose power reaches far back to the birth of the Christian faith, through the echoing halls of the Vatican, and to the dark, corrupt realms of organised crime. Now staying alive is the ultimate challenge. Because the next revelation is the most forbidden of all…

This is not your run-of-the-mill religious, historical, chase, search, code-breaking, discovery of some ancient artefact that proves Christianity is based on a myth or a lie, type of thriller. It’s quite a step up from that.

Passages reminded me of books I’ve read by Alan Furst or Olen Steinhauer. The introspection, the uncertainty, the slightly tainted or regretted past, the feeling I got of the main character just being along for the ride in certain sections of his or her own life.
Gospel Truths is written from the point of view of a middle-aged English police officer, with a slightly troubled past personal and professional life. He is originally from the English counties, but after a high-profile success, he is now working in London. He is handed a bit of a hot potato of a case, involving a suicide they suspect is murder but can’t prove, international banking scandals, The Vatican and various highly un-savoury international underworld figures. His investigations lead him to France, to cathedrals, the possible involvement of the Freemasons, a Gospel that could be written using Jesus’ own words and the long tendrils of freemasonry organisations, with more fingers in more pies than they have fingers. I think I’ve covered the most of it.

The funny thing is, that while the book is called The Gospel Code and the story is ostensibly woven around a murder and a search/chase for an ancient gospel, that isn’t really what (I think, as least) the book is about. It’s more about a personal and introspective search, by the main character Nigel Lyman. We learn more about him, his background and history, than we do about the searched for Gospel. And it’s all the better for that.

If I were to be critical, i’d say that there some background passages were a little too oblique. I liked the style of colouring in his past with some passages which, on the surface, seemed to have little to do with the plot, but were there to illuminate how the reasoning he applied to plot developments, came about. However, sometimes I was struggling to see how exactly they helped me understand him any more than getting on with the story would have done.

Overall, you are going to have to put in a bit of effort into reading this one. It’s much more than an ordinary, airport shop, holiday-reading, page-turning blockbuster, no matter how much the cover blurb would like to convince you you’ve got another Dan Brown in your hands. It’s much better than that.

You can buy Gospel Truths from Abe Books