The Emperor’s Knives by Anthony Riches
My rating: 2 of 5 stars

There should be some sort of drinking game, the sort of thing I’m sure Anthony Riches would approve of, based on all the eyebrow raising going on in his books, Especially The Emperor’s Knives. You take a drink every time a character raises his eyebrows (I say ‘his,’ because the affliction does seem to be limited to the male characters in the books. Not that there are many female characters here or in any of the books so far. Offhand, I can think of four. Marcus’s wife, the other wife who used to be a brothel owner, the sister of a character in The Wolf’s Gold and assorted prostitutes who are not featured long enough to be named). The trouble with the game would be – you be pissed before you got out of the prologue. Okay, maybe that’s being a little harsh – Chapter 1 then.

Now that the shock of the new has worn off, it’s clear that by now, book 7, the writing is really quite dreadful. Toe-curlingly, amateurishly bad in (many) places. Now that they’re in Rome, it’s not possible to have quite so many set-piece, pitched battles. So we’re getting into the seamier side of Roman double-dealing. Words. Don’t mean what they say, don’t say what they mean. So, instead of swords and spears having the cutting edge, it’s words and meanings. Or, it would have been in the hands of a better writer. I’m maybe being a little harsh on poor Anthony, having come to TEK off the back of a couple of almost exquisitely well written books (‘A Colder War’ and ‘Natchez Burning’), but even compared to some of the recent books I’ve read recently from his own genre (Vespasian II or The Lion & The Lamb), then this really isn’t up to it. Nowhere near.

And, I don’t do the whole Marcus haunted by his ancestors appearing several times a night, every night, in his dreams. And speaking to him. Not at his will, but theirs’. Doesn’t happen. Outside of books.

But, on with the bit I enjoy. The piss-taking.

The raised eyebrow-count has, by book 7, reached epidemic levels. The characters in The Emperor’s Knives Strike Back, haven’t progressed to the rolling of eyes, yet. That’s surely the province of the reader as he/she comes across YET another one, either as part of a cluster, or merely an isolated, inappropriate example, standing out like the balls on a bulldog.

Eyebrows this time out, include such beauties as;

“Scaurus raised an eyebrow at the younger man.”

“He pondered Scaurus’ turned head and raised eyebrow for a moment before speaking again.”

“He raised an eyebrow and waited, keeping his face utterly immobile…” (You try that).

And those are just in the first chapter.

Best of the rest:

Even the kids are at it by Chapter 4. “The child raised an expectant eyebrow.”

“His counterpart raised a disbelieving eyebrow.”

“…his eyebrows raised for emphasis.”

Scaurus is still the one with the most raised eyebrows in the series, in fact, his eyebrows are rarely NOT raised. But he outdoes even his previous best, with, while pausing, “raising an interrogatory eyebrow.”

“Mortiferum raising an amused eyebrow as he slid his feet across the sand…” He’s not dancing, he’s making sure he doesn’t fall over anything in the arena.

Coupled with characters constantly inclining, bobbing and shaking their heads, often in recognition of each other’s ‘points’, sometimes inside the same conversation, it reads like watching the mating dance of the Great Crested bleedin’ Grebe at times.

“He raised an eyebrow Saurus, who acknowledged the point with a nod.”

“Cleander inclined his head in recognition of the point.”

Then, it just gets ridiculous: 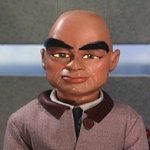 On page 133: “Exingus waited for a moment, allowing Albinus to speak again if he so wished, but the other man simply fixed him with a hard stare and raised his eyebrows.
‘Continue.’
‘As I said, this was no suicide. Aquila and that brute of a centurion who accompanies him everywhere, jumped Centurion Dorso and his men on the street, killed the bodyguards, and dragged Dorso into his private residence. They murdered him in a most gruesome way, dousing him with oil before setting light to him.’

Albinus raised his eyebrows in horror, staring up at the trees above them.”

He was probably looking for wherever it was his eyebrows had flown off to, as there’s no indication that they had come down from the previous time they shot up, just a shade over 18 seconds previously as I read it. And the trees? Where else would they be, if not above them, given Albinus has stared upwards? But, that’s TWO times a character raises his eyebrows inside 9 lines! Not 9 chapters, pages, or even 9 paragraphs. 9 lines. Tell me, in all honesty, that that doesn’t stand out like a turd in a swimming pool? Tell me you don’t think his Editor is missing something. Like their sight.

Actually, struggling to play catch up on the faces of Romans everywhere in Anthony Riches’ Rome, is now the ‘pursing’ of lips. They’re all at it as a sign of everything from deep thought, to inner turmoil, to estimation of how expensive that repair work is going to be (oh, wait, that was the plumber we had round recently). Pursing of the lips is obviously Anthony Riches’ new black.

“He looked up at the four men around the table, pursing his lips in amusement…”

(A slight variation) “The accusing finger turned to point at the senator, who pouted back at him…” Pouted?!

“The informer shrugged again and pursed his lips…”

“…and Scaurus pursed his lips as…”

“He pursed his lips and stared at Marcus for a moment.”

Most of those were also in the first chapter!

The constant eyebrow raising and pursing of lips (though to be fair, I can’t actually recall a character doing both at the same time, maybe I should give it an extra half-star for that?) is like the Roger Moore Fan Club, on a drunken night out, just wandered into a Larry fucking Grayson convention (you maybe need to be British to get that one). The rest of you, look at the pictures.

And what do I mean by ‘the repeats’, the repeats. Well, try this little gem (from the Arena announcer) on for size:

“We are watching a scene from the divine Emperor Trajan’s war against the Dacians, a piece of history well known to any man who fought in that bitterly fought campaign”.

Or; “Julianus allowed his breath to hiss slowly and almost imperceptibly from between his teeth, the tension slowly ebbing from his body as he realised…”

Maybe the worst. Ever. The worst ever combination. Page 258, at the end of one scene, the start of another (hence the gap in the quote below):

“Come on, we can eat these as we go. Follow me and I’ll show you a place you only want to visit once.

Once outside the domus’s sprawling property, Scaurus raised an eyebrow at his first spear.”

But…even that George Clooney of a storm of inanity is bested by this:

P320: “…the champion threw himself into one last frenzied attack…”
Followed straight on with:
“His swords swinging almost incoherently as he stepped forward.”

Wait a moment! ‘Incoherently’?! Incoherently?!; “incoherent |ˌinkōˈhi(ə)rənt, ˌiNG-, -ˈher-| adjective1 (of spoken or written language) expressed in an incomprehensible or confusing way; unclear: he screamed some incoherent threat.• (of a person) unable to speak intelligibly:I splutter several more times before becoming incoherent.• (of an ideology, policy, or system) internally inconsistent; illogical: the film is ideologically incoherent.2 Physics (of waves) having no definite or stable phase relationship.DERIVATIVES incoherence noun.incoherency noun (pl. incoherencies) .incoherently adverb.” How ironic).

Quite apart from the fact that Anthony Riches should notice, or at least get a slight tingle of déjà vu as he writes “*Insert character name, usually Scaurus, here* raised an eyebrow” (with or without a description of what kind – though ‘jaundiced’ is becoming increasingly popular if the last two volumes are anything to go by), what about his editor at the publishing people? I have mused before about how I’ve read enough authors’ Tweets and Facebook poses stating (something like) “book written, sending it off to editor.” Then there come posts describing how they’re now working through the list of suggestions changes and what even an author will more often than not describe as ‘improvements.’ So, why doesn’t Anthony Riches’ editor at Hodder and Whathaveyou, notice and pick him up on – at least – some of the eyebrows and repeats? Looking at Anthony Riches’ not exactly welcoming profile picture on the book jacket, maybe he/she’s too frightened of him to say anything. Or blind. There is no way they couldn’t have noticed (there’s probably even a Braille version). I did and I work in a hospital. Cleaning (amongst other things, I hasten to add) cancer patients’ toilets. Writing or reading books isn’t my one job. But, what about other reviewers? The Sunday Times has reviewed it (I think I saw), why didn’t they mention something that stands out like a pimple on your backside? Do they notice them? Not in any of the reviews I searched just now. But the things are on just about every bloody page. You’d have to be blind (or Anthony Riches’ Editor) not to notice them. Are they reading the books carefully enough? Are they reading the books? Or are they just re-typing out the press release that comes along with their review copy? I know what I think.

They are there, on the page, in black on white, in the book in front of us. Those I’m quoting are quotes from the book in front of me, I’m not making them up, they won’t go away. They are partly noticeable because they are not found in other books. I’m nearly finished with ’Natchez Burning’ and in 800-odd pages, only three sets of raised eyebrows. none in Charles Cumming’s A Colder War. That’s three in over 1200-odd pages. Here, we’ve sometimes got three a page. It isn’t ‘just me,’ you know it. Sure, I do notice ’this sort of thing.’ To do so was a large part of my job back in Advertising. I had to – amongst other things – write copy, check copy, edit copy, check addresses, phone numbers and repeated words. They should not go through. Not if we wanted to get paid, that is. So, I notice them. But no more than you do, admit it. Read the book, open a page at random, tell me I’m wrong.

They do matter. They do tear attention away from an otherwise reasonably interesting story. Let’s get this straight. The idea and aims behind the story are good and well founded enough. It is in many ways a more developed, even intricate (well, intricate for the ‘Empire’ novels) story. It’s just that the execution, if you’ll forgive the pun, is so poor, that it serves to obscure, in a storm of eyebrows shooting here and there, a veritable Mexican wave of spreading arms (indicating supplication, apology and sometimes something else), a lemon-growers tasting-party of pursed lips and a Great Crested Grebe’s mating dance of inclining and nodding of heads, that it’s hard to take seriously. Despite the otherwise solid foundation.

Look. What does he care? I bought this in hardback then listened to it on Audible. So I’ve paid twice. I’m fully entitled to my opinions. They’re based on owning the bloody thing twice – and my eyes.

As I say, there does seem to be a decent semblance of a story and signs of an increase in confidence and ambition to the book, but it’s struggling to come to the surface. However, the inanity and laziness means it’s drowning, not waving.

View all my reviews