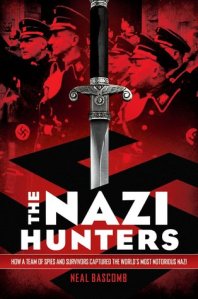 In 1945, at the end of World War II, Adolf Eichmann, the head of operations for the Nazis’ Final Solution, walked into the mountains of Germany and vanished from view. Sixteen years later, an elite team of spies captured him at a bus stop in Argentina and smuggled him to Israel, resulting in one of the century’s most important trials — one that cemented the Holocaust in the public imagination.

The Nazi Hunters is the thrilling and fascinating story of what happened between these two events. Survivor Simon Wiesenthal opened Eichmann’s case; a blind Argentinean and his teenage daughter provided crucial information. Finally, the Israeli spies — many of whom lost family in the Holocaust — embarked on their daring mission, recounted here in full.

A straightforward re-telling account of what happened, where, when and how. It doesn’t need any dressing up. It’s important enough to stand on its own. The details are retold in a clear and concise manner, with time taken to include some of the background both to Eichmann and his thought process throughout and that of the people who found him and were sent to bring him back to Israel. Along with a little of the historical context of the post-war years and where the world was heading going into the 1960s.

The why Israel is dealt with as well. Why not just shoot him where they found him? He needed to be brought to Israel to serve as a reminder to the world that was trying to move on from the Second World War, less interested in old Nazis and more worried about dealing with new Communists. Interestingly, they actually managed to get Eichmann to sign a statement that he came to Israel willingly. Not against his will anyway. By persuading him it would be a chance to put his side of the events.

It’s a naturally tense story all the way through, it doesn’t need artificially ramping up. Especially the troubles they had getting him out of Argentina. If you’ve seen the excellent film Argo, you’ll be in the same ball-park.

In a link to my other book reviews: In The One From The Other Philip Kerr has a section where Bernie travels to Palestine with Eichmann. Where Eichmann was maybe trying to find a place to send the Jews of Germany. That’s true. Also true, is that nobody wanted them.

You can buy The Nazi Hunters at Booksplea.se