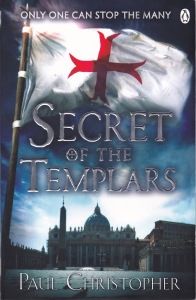 Retired army ranger Lt. Col. John Holliday’s niece is brutally murdered whilst searching for the long-lost Dead Sea Scroll. Holliday has vowed to avenge her death and complete her life’s work, but in doing so he stumbles upon a conspiracy linking the Catholic Church to an illicit art forgery operation involving the Nazis.

Hunted by those determined to hide the truth, Holliday and Interpol agent Peter Lazarus embark on a desperate race. From the vaults of the Vatican to the deserts of Pakistan, Holliday and Lazarus are on a quest to unravel a mystery born in the final days of the Third Reich, and to recover the scroll – the contents of which could destroy the very foundations of the Christian faith.

It does all get a bit frantic really, as secret and not so secret group after secret and not so secret group chase our hero and his new Interpol friend all over Europe and eventually to Afghanistan. Which as you know, for writers of world-spanning thrillers, is like Lee Child’s No-Name, Middle of Nowhere U.S. towns – anything goes. Normal rules need not apply. This, the last in the series, does seem to be going all-out on the flashy-trashy ‘Thriller’ staples. Shadowy groups, assassins, people knowing where you are without ever having appeared in the book before, etc. Nothing says unfeeling, uncaring because I’m richer than you miserable bastards could ever hope to be and therefore don’t deign to conform to your society’s norms, as a member of a secret sect, global power behind everything and all, and have tastes in this and that, that make you plebs say “EWW!” because you don’t have taste, but you presume it must be because you don’t have the kind of money I do that you can’t appreciate such shite, than someone ‘popping’ something in their mouth. Usually a ‘morsel’ of something that is supposed to have taken and age to prepare, by specially flown-in, world’s leading chefs, but you know will taste like shite. ‘Popping’ watch out for it. It’s one of the biggest cliches in the Thriller Book. ‘Popping’ usually occurs, while the person doing the ‘popping’ is having a meeting with someone who is telling them in gruesome detail, about something horrible they have done, or will do to someone who is a minor, but important to the moving-on of the plot. The sort of thing you and I wouldn’t want to hear while wolfing a pizza, maybe.

Secret of the Templars does at least have a bit more about the Templars. Something about the Templars, in comparison with the last few others at least. I hadn’t heard of the Jesus/Judas swap idea before. I have looked it up a little on the interwebs, and it’s there. Personally, I find it intriguing no matter how or where it started. I can see it solving a few conundrums alright. And highlighting or confirming, that Christianity was largely a construct of Paul. There are a few other little bits, not as much as there were in the start of the series, clearly there weren’t enough to go over nine books, but more than there have been recently. Maybe someone should fact-check these books. See what holds water, what he’s made up. Maybe do a book like those there used to be every time Dan Brown released a novel, remember?

Anyway, on the whole, the Templar series has been worth the money. I think it ran its course, but that he might have regretted killing off a couple of characters in the last couple of books and that maybe he packed this one out, to try and avoid accusations of having run out of steam. I’d say read the series, rather than avoid it. I’ve enjoyed them on the whole, some have been better than others, but the quality has been fairly consistently above the middle all the way through.

You can buy Secret of The Templars at Booksplea.se