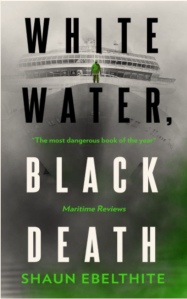 Magazine editor Geneva Jones has been sent on a trans-Atlantic cruise to help secure a major advertising agreement from the CEO of the cruise line Rachel Atkinson, but her efforts to win her over are curtailed by a mysterious crew death. Geneva suspects foul play. Rachel insists its suicide. A former investigative journalist, Geneva can’t resist digging deeper, but what she finds is far more devastating. There’s an Ebola outbreak on the ship, everyone is trapped aboard and Rachel is trying to keep it secret.

Geneva knows enough about Ebola to be terrified, but she’s also onto the biggest story of her career. Rachel turns Geneva’s own colleagues against her when she tries to investigate, so she enlists the help of her son, Aaron Atkinson, whom Rachel adopted from Uganda seven years ago, when he was a teenager. Now an isolated and vaguely broken adult, he’s an easily manipulated source. At least that’s what Geneva thought. Off the coast of Bermuda, with the ship anchored in quarantine, Aaron makes a public announcement informing passengers of the outbreak.

Panic surges through the ship. People begin jumping overboard, ignoring a ship-wide lockdown. The ship’s security start to lose control, tasering passengers indiscriminately. A mayday is declared in front of the world’s media, but Bermuda refuses to open its maritime border. The ship limps toward Miami, with more than half of everyone aboard sick. Rachel shocks everyone by resigning after a public lounge is converted into an apocalyptic triage clinic. Geneva has lost her story, Ebola can’t be treated on-board and the nearest help is more than 3,000 miles away.

I must admit, I’m not one for sea stories.

However, there’s a heck of a lot to recommend about White Water, Black Death. And a couple of things that could be better, to improve and elevate it – and then Shaun’s work is going to be in the absolutely must read category.

The premise is, I felt, absolutely primeval. The unknown, unseen killer, remorseless, relentless and invisible – stalking, chasing, torturing and killing its victims in a confined, inescapable, confined space. Something we (surely) all are afraid of, all would have nightmares about. That this scenario could happen like this, perhaps even  has happened, means Shaun has written a bang up to date thriller, as old as fear itself.

The Speesh Reads Fact Dept reports: Ebola is a severe, often fatal illness in humans. The virus is transmitted to people from wild animals and spreads in the human population through human-to-human transmission. Case fatality rates have varied from 25% to 90% in past outbreaks. The first outbreaks occurred in remote villages in Central Africa, near tropical rainforests. Early supportive care with rehydration, symptomatic treatment improves survival. There is as yet no licensed treatment proven to neutralise the virus.

The idea of the story being on a passenger cruise ship, is sublime and it’s clear that Shaun knows his way around a boat, its workings, both mechanical and personal. Apart from the main strand story, which begins well in the background and comes through strongly towards the end, there’s a lot to go at in terms of the crew’s relationships, internal dramas and clashes. A lot of angles, apart from trying to contain an uncontainable virus are looked at here. It did remind me a little, of that tv series there was years ago, set on a North Sea ferry (I think it was crossing the North Sea?). It’s a little over the top and hurried in with the build-up of scandal and emotions, sometimes feeling (if I can stay in genre) like a sudden squall on a cloudless day. For instance, The setting up of the main crew character’s’ personality could be done a lot better, more subtle. It’s all a bit quick, and in your face. “She’s a bitch – have you got that!” Though, to be fair, there are a lot of leading roles here, most all the characters could be described as ‘main’ that I thought worked really well. Some of the writing here and there is a little clunky, where it should be smooth, some of the analogies have you stopped in your tracks “that doesn’t fit,” even though the idea behind them is good, they just need to work in with the story, even genre, a little better. He does then seem to concentrate on the crew at the expense of the passengers, at least in the early stages, and I had to rewind a couple of times to see if this was a cruise ship, or a motor boat we’re on board. The passengers certainly don’t get given speaking parts, even thought there are ‘More than one thousand people onboard.’

Then, there is a lot of speech and internal feelings and discussions thereof. Next time he could do with dropping some of that and writing some (longer) descriptive passages. There’s surely plenty to go at with the sea, sea cruises and all the different types you get on board. I thought many times, about who to compare Shaun and the book to, maybe Clive Cussler. The book I read of his, was very much in this area. There is, however, enough here to make me think Shaun can be better.

I wasn’t one for sea stories, I am now.

You can buy White Water, Black Death for your Kindle