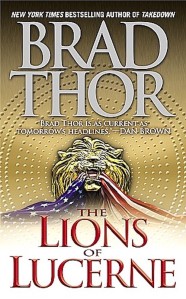 On the snowy Utah slopes, thirty Secret Service agents are viciously executed and the vacationing president of the United States kidnapped, seemingly by the Fatah, a lethal terrorist organization in the Middle East. But Scot Harvath, surviving agent and ex-Navy SEAL, doesn’t believe the Fatah is responsible.

A shadowy coalition comprises some of the highest-ranking officials in government and business – men who operate above the law, realize the threat Scot poses to their hidden agenda, and will do anything to stop him. Framed for murder and on the run, Scot takes to the towering mountains of Switzerland with beautiful Claudia Mueller of the Swiss Federal Attorney’s Office. They brave subzero temperatures and sheer heights of treacherous Mount Pilatus, and the den of notorious professional killers.

My first exposure to this here Brad Thor. Who, despite only having eight letters, seems to be a big name in the world of Thriller writing. The American version. Personally, I’m reluctant to go out buying books by someone with what is surely a ridiculous made-up pen-name. Citizens of the USA obviously have no such problem. But look at the mess they’re in.

Lions (as we scholars call his first ‘Scot Harvath’ book) is a decent enough start, but way too much ‘me too’ to justify that current ‘bestseller’ status. At least to be mentioned in the same breath as Vince Flynn. Which all goes to suggest the subsequent books get much better. Maybe.

Everything’s in the right place: Bad guy is European – check. You can tell he’s really (really) bad because he uses ‘exquisite’ to describe a meal. Check. You can tell they’re ski people, because they call each other ‘dude’ and finish sentences with ‘man.’ Check. All way too much by the numbers.

I’ll stop there for now, because that it is actually set in Europe is good. For me. That it’s set in Europe does though, play into the minds and expectations of his target market, American thrill-seeking connoisseurs: Who know only too well that, along with most of the Middle East, anything goes in Europe. It’s not only where the history comes from, but also where the terrorists come from. If they’re not Arab, they’re European. And if they’re Arab, they came through Europe on their way to the US.

So, me being a nit-picker, I had a nit-picking field-day here:

Sometimes he calls the main man ‘Scot’ next minute ‘Harvath.’ That needs sorting out, needs a pattern. The ‘witty repartee’ between Harvath and other team members he’s clearly supposed to have been through thick and thin with for years, wasn’t. Too clunky. Not funny, not serious. Not light-hearted enough, not fitting with letting off steam under a pressure situation. More like *on page 45, have light-hearted exchange*

Then, it’s all very well them all being totally professional after the event. The time for being professional was before! Not laughing and joking and taking the piss out of all and sundry. These goofs are supposed to be protecting their effing President! (This was written pre-Orange Baboon, so we have to think they want to protect their President). I found myself agreeing with what ‘Lawler’ (the FBI deputy director) said early on; Harvath is a fucking amateur. He’s removing evidence, from the crime scene, ffs! Any one who has seen any kind of crime programme in their life, not even a NICS or that lot, knows not to do that. His part in the story should end here. BT should pick his story up from Harvath’s new office, with its fine views of the Alaskan tundra…

Wanting to establish Harvath’s in-built spy-professional background, a background in the Navy Seals, no less, that has made him so thoroughly professional that he (instinctively, of course) checks everyone in the canteen for threats. But gets ‘jumped’ by a young female CNN reporter carrying a huge great fuck-off microphone! Still, Mitch Rapp wasn’t that good until around book 5, so I’ll not be too hard on him.

Then, the bad guys. Those last moment kills, shots, etc, why is it Scot and the other goodies always wait until the bad guy who is about to shoot our hero, has finished his statement on how he’s gonna kill him and why and what Harvath or he (the bad guy) did wrong? Just once, we’ve figured it out – interrupt him! With bullets! It leads to another (as in, for books of this ilk) last chapter, Agatha Christie-type explanation of everything. I’ve ranted about that sort of thing before. What does the author think? That we couldn’t figure it all out already – It wasn’t exactly hidden. When we were not with Harvath, we were with the bad guys, so we know what they were up to! Or that he’s created such a deviously plotted book that there’s no way we could have got it all? There are maybe a couple – max – of points that might need clearing up, but no more. If we haven’t got it and the Star Trek-ending* isn’t vital to the plot, then you need to go back and re-edit, my boy.

Oh, and cut down on the melodrama; “Sam, that was for you” nonsense.

The Speesh Reads Fact Dept have been to Lucerne: It is a city in central Switzerland, in the German-speaking portion of the country. It is the capital of the canton of Lucerne and part of the district of the same name. With a population of about 85,000, Lucerne is the most populous town in Central Switzerland. One of the city’s famous landmarks is the Chapel Bridge, a wooden bridge first erected in the 14th century.

But, relax, it’s not all bad. From a shaky, rolling the eyes to heaven start, it does improve and I found myself warming to both Harvath and the plot. I’m still not sure about Mr Thor as a person, yet. Covering yourself in the (American) flag and a love of guns, is clearly supposed to (positively) cloud our (critical) judgement (if we’re American). If you go to his website, he lists all the guns and other special sort of stuff that is featured in each book. And where you can buy them. He also does a lot for The Veterans. Who, like it or not people, chose to be soldiers. If they get killed on the job, why do they deserve more respect than someone who falls head-first off a scaffolding and dies on their job?

Whilst the Scot Harvath character will have to go some in future books, BT does a very good job with the political in-fighting back in Washington. There, he is doing a job at least comparable to the mighty Vince Flynn. The career politicians in the background are real bastards you’d just love to punch out. They had me livid sometimes, so I thought – nice one Brad, you got me! That alone will have me carrying on and getting hold of the number two in the series.

*Star Trek Ending: After the action has concluded, back on the bridge, where light-heartedness ensues.

You can buy The Lions of Lucerne at Booksplea.se
(I think it’s an American import (left). Due to the dreadful cover, obviously, but it looks like the ‘pocketbook’ shape they go for over there. Which is ‘thinner,’ from side-to-side looking at the cover, than what you and I are used to). Maybe we have different pockets?