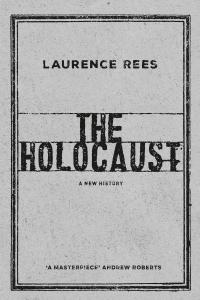 Laurence Rees’ masterpiece is revealing in three ways. First, it is based not only on the latest academic research, but also on 25 years of interviewing survivors and perpetrators, often at the sites of the events, many of whom have never had their words published before. Second, the book is not just about the Jews – the Nazis would have murdered many more non-Jews had they won the war – and not just about Germans. Third, as Rees shows, there was no single ‘decision’ to start the Holocaust – there was a series of escalations, most often when the Nazi leadership interacted with their grassroots supporters.

Through a chronological narrative, featuring the latest historical research and compelling eyewitness testimony, this is the story of the worst crime in history.

Calling the Holocaust a ‘crime,’ doesn’t really seem to me to do it justice. It was much more than that. I’m no expert on the subject, though I have read a couple of books that take in the Holocaust as a whole – this one now, and Martin Gilbert’s incredible Holocaust – and I have, of course, come across shorter histories in other books about the Second World War. What was interesting about this one, something that linked in with the later chapters of Richard J. Evans’ utterly incredible The Third Reich In Power was that the Holocaust was in no way a spur of the moment thing – as a lot of people (mentioned here) seem to both go looking for one point in time, one event, or one person who decided the killing of all Jews should happen. It didn’t happen that way. Hitler had the power to get it carried out, though he was just a product of his times. The idea of racial cleansing and Eugenics was not exclusively his, or the Nazis’. Nor was the Wannsee Conference the point at which the Holocaust began. And the people who attended the conference weren’t the people who decided to do it. It is surely us, sitting here in later generations, that look for a smoking gun, and someone to blame. But all that would surely do, is give people who weren’t holding that gun, or there at the time, an excuse to absolve themselves. The possibility to eradicate the Jewish peoples, played into the hands of the Nazis, who used thousands of years of enmity towards the Jewish people, from across the world, to their advantage. To have a scapegoat to blame for whatever they wanted, to have an excuse to rid their conquered lands of people, so their own Germans could have lebensraum, and as a bargaining tool to beat the Allies with.

The Holocaust and books like this and Martin Gilbert’s Auschwitz and The Allies doesn’t draw a line between us and them, either. In the early stages, before mass killing got underway, countries who would form the alliance, did whatever they could to not take Jewish people in. The Germans then added another strand to their excuses, that they were doing everyone a favour by ridding Europe of Jews. No one comes out of it without blame or tainted by blame.

There was something in the air, that came to a head in the period of the first half of the 20th Century. Something that we thought we’d overcome as Human Beings, until the break up of Yugoslavia and now with what the Orange Baboon is setting going in the USA.

It’s been some thirty years now, since Martin Gilbert’s Holocaust was first published, so, with maybe access to new evidence and archives, the time was right for a new version. Laurence Rees has done an admirable job here of presenting the facts in a supremely readable and understandable way. It’s done in chronological strands, looking at just about every aspect of the process that led to the dedicated killing camps and then their ‘liberation.’ If you read this book, and I urge you to do so, you’ll emerge stronger and wiser, more understanding and ready to fight injustice. On all sides.

You can buy The Holocaust: A New History at Booksplea.se