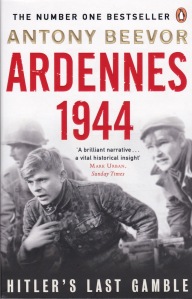 The prizewinning historian and bestselling author of D-Day and Stalingrad reconstructs the Battle of the Bulge in World War II, in this riveting new account

On December 16, 1944, Hitler launched his ‘last gamble’ in the snow-covered forests and gorges of the Ardennes in Belgium, believing he could split the Allies by driving all the way to Antwerp and forcing the Canadians and the British out of the war. Although his generals were doubtful of success, younger officers and NCOs were desperate to believe that their homes and families could be saved from the vengeful Red Army approaching from the east. Many were exultant at the prospect of striking back.

The allies, taken by surprise, found themselves fighting two panzer armies. Belgian civilians abandoned their homes, justifiably afraid of German revenge. Panic spread even to Paris. While some American soldiers, overwhelmed by the German onslaught, fled or surrendered, others held on heroically, creating breakwaters which slowed the German advance.

The harsh winter conditions and the savagery of the battle became comparable to the Eastern Front. In fact the Ardennes became the Western Front’s counterpart to Stalingrad. There was terrible ferocity on both sides, driven by desperation and revenge, in which the normal rules of combat were breached. The Ardennes—involving more than a million men—would prove to be the battle which finally broke the back of the Wehrmacht.

In this deeply researched work, with striking insights into the major players on both sides, Antony Beevor gives us the definitive account of the Ardennes offensive which was to become the greatest battle of World War II.

This, of course, is the real-life history of all those war films you’ve seen of a Sunday afternoon. If you’re English and of my generation.

So it is worth reminding yourself, especially around this time of year, what your ancestors went through and did, to make sure you have the choice to not give a fuck.

As you can see from the cover photo, that it was Hitler’s final gamble is evidenced by the fact that the Germans were worn down to using younger and younger soldiers in their army. There were still enough of the battle-hardened soldiers left to strengthen the resolve of these youngsters, but desperation in all its forms for the Germans, very nearly proved the Allies undoing. If the Germans had broken through and achieved their objectives, I probably wouldn’t be here writing this, nor you reading it. Worth thinking about.

The really eye-openingly remarkable thing about the whole book and the latter stages of the war in General, from the Allies side, was how much of a part the egos of the various Allied commanders played in trying to fuck the whole thing up. Especially Montgomery. He really was an idiot. That’s not based solely on this book, but others by Antony Beevor and Max Hastings. Each of the commanders thought they knew best, and reading between the lines, it seems like they were more or less threatening to take their bats and balls home, if they didn’t get their way. And who is left facing the bullets? Yup, people like you and me. As I’ve mused before; the Allies won because our leaders were marginally less incompetent than theirs.’ And their big problem was, of course, Hitler.

I was at a talk he gave here in Aarhus a couple of months ago, and really would have liked to have asked him properly about Montgomery. I did manage to snatch a word while he was signing books, and got the idea that, facing an audience of Danes as he was, who having been liberated by Montgomery and seeing him as something of a hero, may not have been too well disposed to hearing bad things about him, if I’d have asked him to elaborate on his writing about the General. A close shave, I think he was thinking.

Sir Antony Beevor is a superlative historian and an excellent writer. He makes his points well, with the facts, but never allows his own opinions, whatever they are, to take precedence. If you’re stuck for a book to read on the Second World War, I can thoroughly recommend any of his I’ve read.

You can buy Ardennes 1944: Hitler’s Last Gamble at Booksplea.se