Series: The Rise of Sigurd 3

Norway. AD785. A wild place, a place of blood, a place where the gods must be favoured…

Fighting in Sweden for an ambitious warlord, Sigurd Haraldarson and his oathsworn band are winning fame and reputation. But to confront his hated enemy – the oath-breaker and betrayer King Gorm – Sigurd must win riches as well.

Many believeSigurd to be Odin-favoured, but his exploits have drawn the eye of another god: Loki the Trickster. A daring raid goes wrong, and suddenly Sigurd is a prisoner of the powerful Jarl Guthrum. Bound like a slave, he is taken to the sacred temple at Ubsola, where the blood of human sacrifice flows to appease the gods.

Here Sigurd will face the sacrificial knife, but here too he discovers a potent relic: Gungnir, the great spear that people say, was once carried by the Allfather himself. With just such a weapon in his possession, Sigurd would be able to assemble a host strong enough to challenge King Gorm, and avenge the betrayal of his father and the murder of his family.

Indeed, the roar of Odin and the wild hunt will be as nothing compared to Sigurd’s rage, for it will be as if he and his warriors are borne on the wings of the storm…

Finally we got the book we knew Giles K was capable of. Exciting, action-packed, tense, nicely plotted (though it’s simple enough really), with relatively few cliches – of the Hist Fic Klub-type or of Kristian’s own – and with an ending battle the like of which I’m fast becoming to think only Giles K can write. I’m not saying you should avoid the first two and go straight to this – though you could. Maybe to fully ‘get’ this one, you need to wade through one and two. Personally, I would have liked to have avoided number one entirely, but there you go. I’ve seen enough other comments around and about to know that not everyone thinks like me, and I’m just fine with that. But if Giles would like to run things by me first in future, he knows where I am. 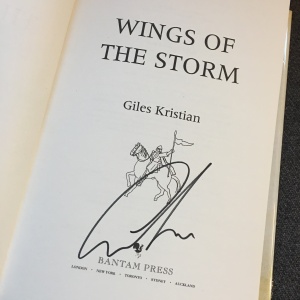 So, what I’m left with is the feeling that there surely is no one better at the rolling, rumbling, not over yet, tense, chase, omg battle scene than our Giles. The end of this book with have you gasping for air, biting your nails, with everything crossed for the ‘right’ outcome, but not yet, then there’s this, now? No, there’s more. I can’t take any more. You have to! I like that, as I liked the end of the second Civil War book. That was a masterclass, this is the equal of it.

See, when he sits down and takes this writing lark seriously, he can do some of the best, freshest, most compelling and invigorating story-telling there is. Unfortunately though it’s not all the time – he still hasn’t got over his beard fixation (I don’t know if he’s ever worn a thigh-tickler himself, all the pictures of him I’ve seen have been clean-shaven. There sure is something about a beard he can’t resist. A beard fixation. They’re combed, growing with the grass, singed, braided, you name it. And there are all sorts of things in those beards too, though mostly small nestling families of smiles. And teeth. His alter-ego can’t refrain from one too many, ridiculous, “teeth flashed in his beard,” to try and ruin the good work. Unfortunately, this fixation that beards can signify every feeling, small or large, hide ‘wolfish grins’ probably, gives a completely wrong, negative, effect, undoing previous good work.

– What he thinks: Unique, compelling, period and character detail.

– What I think: Cut-Throat Jake.

If you, like me, been waiting for the good one, this is it. The wait was more than worth it, this is what Giles K can do when he concentrates. It’s only short, just 298 pages, it’s distilled down to the essence of the story, the ending, the ending and the ending and the reckoning the series has been saying was coming all along.

You can buy Wings of the Storm at Booksplea.se

4 thoughts on “Review: Wings of the Storm – Giles Kristian”