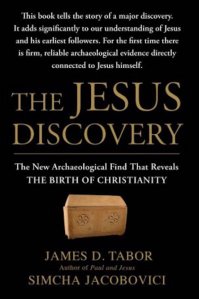 A recent major archeological discovery in Jerusalem is revolutionising understanding of Jesus and the earliest years of Christianity. The authors have examined a sealed tomb in Jerusalem, where they have found the earliest evidence for a belief in the resurrection of Jesus, based on what appears to be the oldest Christian iconography ever discovered.

This book, as far as I can tell, is a follow-up, of sorts, to The Jesus Family Tomb book. In that book, they detailed the finding of a tomb in Jerusalem, in which there were a series of ossuaries, which had names inscribed on them, including Jesus, son of Joseph; Mary; and Mariamene Mara (interpreted as Mary Magdalene). In that book, they also mentioned another nearby tomb. This book is mostly about that second tomb, but it uses the finds there, to look in quite some detail, at the early Christianities they began during and right after Jesus’ life and death. As I mentioned before, because the Christianity we all know and have grown up with (even if you’re not a Christian) and assumed was the only one, wasn’t. The Christianity we know, was invented by someone who never knew Jesus, didn’t live in the area Jesus worked and never heard him speak. Paul. The book doesn’t really tread on the toes of those who believe in the resurrection, but it does discuss the various beliefs in what a ‘risen’ Jesus meant, to the early churches. As I say, there were many different versions in the years following Jesus’ death, and Paul’s managed, not so subtly, often with force, to become the ‘official’ one.

The book looks at the inscriptions and even the placing/positioning of the ossuaries in the tomb, to tease out further clues as to what the early Christian world was like and what, most importantly, they believed in. It is absolutely fascinating. You have to be up for it, in the open frame of mind-set, I guess – luckily, I am.

OK. I’ve had a look around and of course, there are those who, either because it doesn’t back up their version of The Faith up, or who want to make a name for themselves from poo-pooing the interpretation of the inscriptions (think modern-day 7/11 unbelievers), who dismiss all that Mr Tabor and Mr Jakobovici have postulated, but they look very much like those who would do that anyway. How can people who aren’t covered in book dust, who don’t sit in back rooms of half-forgotten universities with a zillion years of previous nit-picking behind them, who have websites and, god forbid, make documentaries! that appear on television (whatever that is) have anything worthwhile to say on MY subject?! You know the sort. Admittedly, unlike The Holocaust, 9/11, the Moon Landing, there are possibilities for interpreting some of the evidence in a negative way. My reading of the book, was that just about every different suggestion made in the book, was looked at from every conceivable angle and argument and justified to my satisfaction.

I’m not a sceptic on the Jesus-front. I’m open minded. I also think it could be reasonably argued that the man we call ‘Jesus,’ never existed. It could also be argued, that he did. These tombs found in Israel, would seem to suggest he did. Though, of course, the Jesus ossuary also suggests that the ‘Jesus’ we’ve grown up with, never existed. See? Read the book, make up your own mind.

You can buy The Jesus Discovery from Booksplea.se