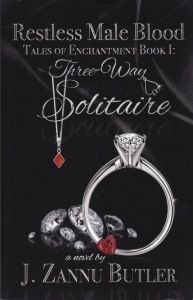 Beautiful and unblemished, polished and purposeful, and because she’s guiltless and above reproach: she is thus titled ‘worthy fetcher’ which incurs the sorrow of salvaging lost souls – people who died tragically, sometimes by their own misguided hands.
Her duties require that she be absent from her charmed but normal life with her handsome husband and their three pretty little girls for days and weeks at a time. Her customary life is uprooted and she crosses paths with a hunter who has great power, who’s hard to resist and who won’t be denied – a hunter who wants her and claims he’s everything her husband is not.
A devoted wife’s life spins away from her family when the hunter makes his debut by sliding into her space. Her known world shifts, crumbles and scatters about as she falls into his sacred and profane world. Helpless at the hands of the lordly hunter who says he loves her and a few others, too. For her, though, he must be the one and only.
“This is madness,” she thinks as he gives her a biased choice to make. And as always with intense love that feels good but makes no sense, she loves her husband and the hunter.

I really didn’t know what to make of this before I started, while I was reading and I’m still not sure now that I’ve finished.

It feels in many places like it is written by someone for whom English is not their first, their native language. There is an intriguing way with the words, with the sentence and construction in general that seems to come from another background to the one I’ve grown up reading in.

It seems part fairy tale, part science fiction, part romance, part cautionary – even morality – tale. Like writing a dream down just after waking, while you’re still groggy and trying to remember and make sense of it. It feels like it comes from our far out of Africa distant past, but also way off in our future. A ‘folk memory’ as the Danes around me here would say. A fantasy, for sure but also, is it an allegory? Can there be interpreted a hidden, perhaps moral, meaning?

The use of adjectives and even what would normally be descriptions, as names, suggests she is wanting to make it a universal tale, telling universal truths about life and love. I did have flashes of ideas, that felt like enlightenment, while I was reading, trying to chase the meaning. The restless males must be Elemental and The Hunter, but could equally be the actual story, as it darts around, never still or predictable, never wanting to be tied down to any one meaning. Solitaire, the woman at the centre of the ‘three way’ is what the males are essentially fighting over, though, from remembering the first sections, I felt that it is she who is actually in charge here, having had the ‘power’ to cause such a disruption in others’ lives and with the power to pull out of the whole thing at any time she wished. And bringing it closer to a fairy tale, is the Grandmother figure, perhaps a more powerful version of Solitaire herself, perhaps a look at what Solitaire might become in the future.

For me, for whom this book is usually a long way from my cup of tea (I don’t actually drink tea, in case you’re wondering), and I did ask the author to have a look at the kind of book I like reading (and reviewing), and if she still thought I’d be interested in reading her book(s), then she was welcome to send away. I expected, from looking at the cover anyway, to be disappointed. What I didn’t expect was what I read and as the book developed, what it did to me. I think in a way it is the ‘love that feels good but makes no sense’ bit at the end of the description there, that explains more of what the book is about than I can. If/when you read it, it’s absolutely certain you’ll see something else in it. I’ve written this review on the 5th April, but if I wrote it again in a few months, or a year, I’d probably have different ideas on what it might be about.

Buckle up and start on truly weird yet wonderful journey.

*Ms. Zannu sent me the first two books in her series, so I will be getting on with reading the second one soon – just as soon as I’ve recovered from this one!
**While we are on the cover. I’d say it was wrong. It looks like what I expected it to be, especially when seen in context with the Restless Male Blood of the title, a straight ahead romance. It isn’t. Don’t ask me what I’d change it to, that sort of thing used to be my job, but not any more.
***Then, as with the recent Vector book I reviewed, there seem to be too many titles. What is the title? Three Way Solitaire? If so, that should come first. Tales of Enchantment Book 1, fine, but then what’s Restless Male Blood about? Are the rest going to have that in? All in all, the layout of the typography should be different, less confusing.