Robert Fabbri’s Vespasian series doesn’t get the recognition it so abundantly deserves, I feel.
They are vivid, fresh and memorable and, along with Douglas Jackson, he is one of the two most consistent, maybe even best Roman writers, around. And that’s official.
Only thwarted by some dreadful typography decisions…never, never, ever (never), use condensed type on a cover. Find another typeface, make it smaller or on two lines – or all the above. Oh, and perhaps one too many ‘Rome is in turmoil’s.

Should you wish to buy the book(s), clicking on the book image, will take you to its page at The Book Depository.

1. Vespasian Tribune of Rome (2011)
26AD
16-year-old Vespasian has left his family farm for Rome, set on finding a patron and joining the army. But he discovers a city in turmoil and an empire on the brink. The ageing emperor Tiberius is in seclusion on Capri, leaving Rome in the iron grip of Sejanus, commander of the Praetorian Guard and ruler of the Empire in all but name. It is no secret that this might not be enough for him.
Sejanus’ spies are everywhere – careless words at a dinner party can be as lethal as barbarian arrow. In a city where treachery and intrigue are a way of life, Vespasian is out of his depth, making dangerous enemies and, some would say, even more dangerous friends…
With his life under threat, Vespasian flees the city for an unfashionable Legion on the Balkan frontier. But even here, there is no escaping Roman politics. Rebellion is in the air and unbloodied and inexperienced, Vespasian must lead his men in a savage battle with hostile mountain tribes – dangerous enough without renegade Praetorians and imperial agents trying to kill him. Somehow he must survive long enough to uncover who is behind the growing rebellion. 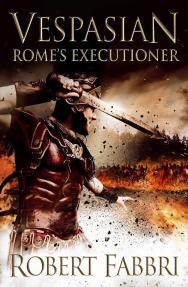 2. Rome’s Executioner (2012)
Thracia, 30 AD.
Even after four years military service at the edge of the Roman world, Vespasian can’t escape the tumultuous politics of and Empire on the brink of disintegration.
His patrons in Rome have charged him with the clandestine extraction of an old enemy from a fortress on the banks of the Danube before it falls to the Roman legion besieging it. Vespasian’s mission is the key move in a deadly struggle for the right to rule the Roman Empire. The man he has been ordered to seize could be the witness that will destroy Sejanus, commander of the Praetorian Guard and ruler of the Empire in all but name.
Before he completes his mission, Vespasian will face ambush in snowbound mountains, pirates on the high seas and Sejanus’ spies all around him. But by far the greatest danger lies at the rotten heart of the Empire, at the nightmareish court of Tiberius, Emperor of Rome and debauched, paranoid madman.

3. False God of Rome (2013)
Vespasian is serving as a military officer on the outskirts of the Roman Empire, suppressing local troubles and defending the Roman way. But political events in Rome – Tiberius’s increasingly insane debauchery, the escalating grain crisis – draw him back to the city. When Caligula becomes Emperor, Vespasian believes things will improve. Instead, he watches the young Emperor deteriorate from Rome’s shining star, to a blood-crazed, incestuous, all-powerful, profligate madman. Lavish building projects, endless games, public displays of his relationship with his sister, Drusilla and a terrified senate, are nothing to Caligula’s most ambitious plan: to bridge the Bay of Naples and ride over it wearing Alexander’s breastplate. And it falls to Vespasian to travel to Alexandria to fetch it from Alexander’s mausoleum. Vespasian’s mission will lead to violence and theft – and in the end, to an act of ultimate betrayal.

4. Rome’s Fallen Eagle (2013)
Caligula is dead. Rome is in the hands of a drooling fool – and Vespasian must fight to save his brother’s life and find the Eagle of the Seventeenth.
Caligula has been assassinated and the Praetorian Guard have proclaimed Claudius Emperor – but his position is precarious. His three freedmen, Narcissus, Pallas and Callistus, must find a way to manufacture a quick victory for Claudius – but how?
Pallus has the answer: retrieve the Eagle of the Seventeenth, lost in Germania nearly 40 years before.
Who but Vespasian could lead a dangerous mission into the gloomy forests of Germania? Accompanied by a small band of cavalry, Vespasian and his brother try to pick up the trail of the Eagle. But they are trailed by hunters who pick off men each night and leave the corpses in their path. Someone is determined to sabotage Vespasian’s mission
In search of the truth, pursued by barbarians, Vepasian will battle his way to the shores of Britannia. Yet can he escape his own Emperor’s wrath?

5. Masters of Rome (2014)
Britannia, 45AD.
In the shadow of Stonehenge, Vespasian’s brother, Sabinus, is captured by druids. The druids want to offer a potent sacrifice to their gods – not just one Roman Legate, but two. They know that Vespasian will come after his brother and they plan to sacrifice the siblings on a summer’s day. But to whom are they making this sacrifice? What were the gods of this land before the Celts came? Only the druids hold the secret and it is one of pure evil.
Vespasian must strive to save his brother whilst completing the conquest of the haunted isle, before he is drawn inexorably back to Rome and the heart of Imperial politics. Claudius’ three freedmen remain at the focus of power. As Messalina’s time as Empress comes to a bloody end, the three freedmen each back a different mistress. But which woman will be victorious? And at what price for Vespasian?

6. Rome’s Lost Son (2015)
Rome, AD51.
Vespasian brings Rome’s greatest enemy before the Emperor. After eight years of resistance, the British warrior Caratacus, has been caught.
But even Vespasian’s victory cannot remove the newly-made Consul from Roman politics: Agrippina, Emperor Claudius’ wife, pardons Caratacus. Claudius is a drunken fool and Narcissus and Pallas, his freedmen, are battling for control of his throne.
Separately, the decide to send Vespasian east, to Armenia to defend Rome’s interests. But there is more at stake than protecting a client kingdom. Rumours abound that Agrippina is involved in a plot to destabilise the east.
Vespasian must find a way to serve two masters – Narcissus is determined to ruin Agrippina, Pallas to save her. Meanwhile, the east is in turmoil. A new Jewish cult is flourishing and its adherents refuse to swear loyalty to the Emperor. In Armenia, Vespasian is captured. Immured in the oldest city on earth, how can he escape? And is a Rome ruled by a woman who despises Vespasian any safer than a prison cell?

7. The Furies of Rome (2016)
AD58.
Rome is in turmoil once more.
Emperor Nero has surrounded himself with sycophants and together they rampage throughout the city, visiting death and destruction as they go.
Meanwhile, Nero’s extravagance has reached new heights. The Emperor’s spending is becoming profligate at the same time as the demands of keeping the provinces subdued have become increasingly unaffordable.
Could Nero withdraw from Britannia and at what price for the Empire?
As the bankers of the Empire scramble to call in their loans, Vespasian is sent to Londinium on a secret mission, only to become embroiled in a deadly rebellion led by Boudicca, a female warrior of extraordinary bravery. As the uprising gathers pace, Vespasian must fight to stay ahead of Rome’s enemies and complete his task – before all of Britannia burns.

8. Rome’s Sacred Flame (2018)
Rome, AD63.
Vespasian has been made Governor of Africa. Nero, Rome’s increasingly unpredictable Emperor, orders him to journey with his most trusted men to a far-flung empire in Africa to free 200 Roman citizens who have been enslaved by a desert kingdom.
Vespasian arrives at the city to negotiate their emancipation, hoping to return to Roma a hero and find himself back in favour with Nero. But when Vespasian reaches the city, he discovers a slave population on the edge of revolt. With no army to keep the population in check, it isn’t long before tensions spill over into bloody chaos.
Vespasian must escape the city with all 200 Roman citizens and make their way across a barren desert, battling thirst and exhaustion, with a hoard of rebels at their backs. It’s a desperate race for survival, with twists and turns aplenty.
Meanwhile, back in Rome, Nero’s extravagance goes unchecked. All of Rome’s elite fear for their lives as Nero’s closest allies run amok. Can anyone stop the Emperor before Rome devours irself? And if Nero is to be toppled, who will be the one to put his head in the lion’s mouth? 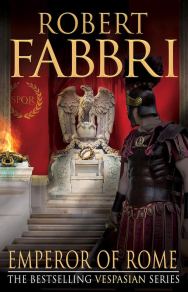 9. Emperor of Rome (2019)
Vespasian is tasked with the impossible. Should he quell the revolt in Judea, as Nero the emperor has instructed, or must he resort to the unthinkable and sabotage his own campaign? If his conquest succeeds, he risks becoming the sole object of the Emperor’s jealousy. If he fails, then his punishment will be severe. The fate of his men and his beloved son, Titus, all hang in the balance.
But unknown to Vespasian, Nero has committed suicide, catapulting Rome into political turmoil. Sabinus, Vespasian’s brother, is caught between the warring factions of Aulus Vitellius, a cruel opportunist and the noble Marcus Salvius Otho, who finds himself severely outnumbered.
With a contested throne and an army at his disposal, now may finally be Vespasian’s time to ascend, to conquer, to achieve what countless prophecies have foretold and take control of Rome itself. Will Vespasian at long last be the one to wear the purple?