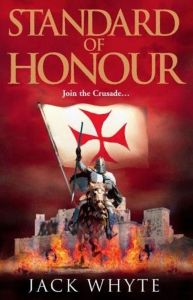 It is sixty years since the secret Brotherhood of Sion, founders of the Knights Templar, uncovered the treasure vouchsafed them beneath the Temple Mount in Jerusalem. Now the ambitious and ruthless Plantagenet King Richard the Lionheart leads the Third Crusade against Saladin, and both the honour of the Templars and the mission of the Brotherhood are at risk.

Andrew Sinclair is one of the few survivors of the Battle of Hattin in 1187. As a member of the clandestine Brotherhood he was taught Arabic before being sent to the Holy Land on a mission that neither the Order of Templars nor the leaders of the Pope’s armies can know of. Sinclair’s captivity following the battle led to his friendship with the infidel and threatened to divide his loyalty. One of the great secrets of the Brotherhood is that they are not Christians, unlike the Templars.

Sinclair’s cousin and fellow member of the Brotherhood, Sir Andre St Clair, arrives with Richard from Cyprus. The secret mission they must pursue will lead them into the desert and the lair of the fearsome Assassins. And meanwhile Saladin’s clever tactics in battle, including the butchery of the magnificent destriers, the massive horses that carry armoured Frankish knights, bring reversals to the Christian cause from start of the Crusade.

But it is Richard the Lionheart’s treachery and deceit that convince both cousins that the Crusade is a sham, and that all men are venal and greedy, driven by the lust for power. Only their knowledge of the Order of Sion saves them from despair: their secret mission becomes more vital than ever before.

Strange, slow, long, but still enjoyable. Though, I’m really not too sure why. On the face of it, not an awful lot happens. It feels like what it of course actually is; number two in a trilogy (I haven’t read number three yet); a transition novel, between one and two.

My first problem was that it doesn’t exactly follow on from the first in the series. In that one, the Templars are formed and find what they’re looking for under the old Jewish Temple of the Mount. This one, takes place a number of years later and whilst many of the general themes from the first, are present and correct, there aren’t an awful lot of links in terms of personnel or direct links, in terms of developing what they found and how the Templars might have used whatever it was they found, to become what they did and possibly are today. Really, apart from the location, the Holy Land and the fact that the main characters are members of the organisation behind the Templars, it is a different story, different characters.

However, whilst I read and read and waited patiently for something to happen, I actually got quite involved with the themes and the story. The detail and the evocation of the period, is impressive. But I often got the impression that the author does want you to know he’s done an awful lot of research and that he wants to make absolutely sure you get the thrust of what he’s saying. So, even though it’s a good, long book, he hasn’t got the space to weave all he’s wanting to impart into the events that could make up the story. He plumps for having his two main characters sit discussing these ideas and ask each other leading questions in a rather false and stilted manner. What the characters are really saying is “please explain to me in great detail, exactly what the author’s research told him”. After a couple of these sessions, it becomes a bit wearing to be lectured at in this manner. There are quite a few other sections that could have been edited down, to allow for what he is trying to impart to be woven into actual events making up a story.We don’t really get anywhere towards the end and I think, a few days later, that we left things on the eve of, hopefully, some big events in the Crusade and some sort of revelation about what the Templars intend to do with whatever they found. Buying Cyprus isn’t enough.

Having said all that…while I can’t really recommend this one over a few of the others I’ve read in this style, I still found it enjoyable and if it hadn’t been for the distractions of owning an iPad2, I’d have read it a lot more quickly. I will be buying the number three, when I’ve ploughed through the books I’ve got waiting on the ‘to read’ shelf.

You can buy Standard of Honour from The Book Depository