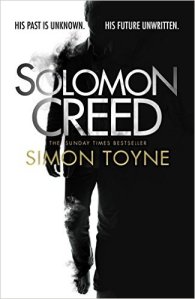 After much debate:
4 out of 5 Stars

A plane crashes in the Arizona desert. One lone figure emerges alive from the wreckage.

He has no memory of his past, and no idea of his future.

He only knows he must save a man. But how do you save someone who is already dead?

This one looked good on the shelf, looks good in the hand and promised much in the read. It was good and interesting tale, well put…however. How can I put it? It wasn’t like I was disappointed or anything, absolutely not, just that I thought it had the potential to have done more with the premise, the set up and the early execution.

It reminded me a lot – at least at the start – of the first Jack Reacher book. No-name stranger walks into a small town in the middle of nowhere USA. Run by corrupt businessmen with the local sheriff in their pockets. That’s what first did disappoint me. It’s too easy. Too easy to detach the whole thing from any kind of reality reference points. We all know, from countless tv series, films and books, that these places exist. They do their own thing down there and well, it’s all been done before. Set it somewhere else and you’ve got a whole new ball-game. And, like Lee Child, the writer is English, but writing about a typical American character – amnesia included, as they all seem determined to learn history’s lessons – in an American middle of nowhere town. I suppose, as an English writer, it’s easy to do that, because you can make it do whatever you want and folk will believe it, as ’the sort of thing’ goes on down there, for sure. But why? Well, maybe they needed their Lee Child/Jack Reacher, with a twist. Probably.

It is about a catalyst who doesn’t know anything about who he is, helping others find out who they are, I guess. While the ‘who am I?’/’who is he?’ angle did seem to go awol in the middle half (if you say the book is in four quarters), I enjoyed it, it’s interesting, and will certainly be buying the follow-up, even though I felt it should have been a lot better. Maybe that will be.