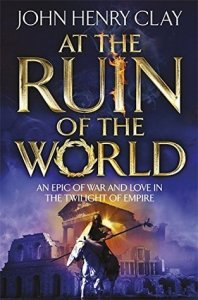 The Roman Empire is crumbling.

The Emperor is weak. Countless Romans live under the rule of barbarian kings. Politicians scheme and ambitious generals vie for power.

Then from the depths of Germany arises an even darker threat: Attila, King of the Huns, gathering his hoards and determined to crush Rome once and for all.

In a time of danger and deception, where every smile conceals betrayal and every sleeve a dagger, three young people hold onto the dream that Rome can be made great once more. But as their fates collide, they find themselves forced to survive in a world more deadly than any of them could have imagined.

What can they possibly do to save the Empire, or themselves, from destruction?

It took a while before it dawned on me that this wasn’t quite what I’d thought, hoped, it was. A continuation of the first – The Lion and The Lamb. It is set in the same historical period, a bit later maybe and in southern France and Italy, rather than Britannia. Other than that, I’m struggling to see what he wanted to do with this. Of course, a look at the final phase(s) of the Roman Empire, but it really doesn’t come over enough. Doesn’t hit hard enough. There is a sense of the mental struggle there must have been, seeing their whole lives, pasts, presents and futures, being swept away by ‘barbarians.’ That sense of surety in society continuing forever how it had been being called into question. However, by going in so ‘close’ to just a few families, it just seems like they’re the only ones having problems, while things go on, somewhere else, around them. I can well imagine that what I got out of it, I brought with me, by knowing something of what went on and drawing some conclusions, others might not.

It’s an interesting period. A very interesting period and whilst the book is nicely written and in many ways does touch on a lot of the elements that made the time interesting, I finished and found myself missing something, wanting more. Apart from the final few chapters, it really didn’t reach out and grab me as I thought it should or would, if it had continued with the characters from his first book.

Related review: The Lion and the Lamb

Buy At the Ruin of the World at The Book Depository