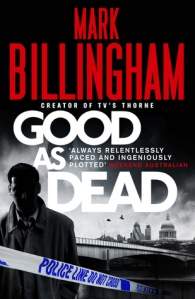 The hostage
Police officer Helen Weeks walks into her local newsagent’s on her way to work. It’s the last place she expects to be met with violence, but she is about to come face to face with a gunman.
The demand
The hostage-taker is desperate to know what happened to his beloved son, who died two months before in youth custody. By holding Helen at gunpoint, he will force a re-investigation into his son’s death. And one man knows the case better than any other – DI Tom Thorne.
The twist
As the body count rises, Thorne must race against time to bring a killer to justice and save a young mother’s life.

I can’t say where this one figures in Mark Billingham’s Tom Thorne series, for good or bad, as it’s one of those I’ve not really paid much attention to getting or reading in sequence. Not like me at all. As with the previous one I read and the other one I have, I’ve got them on special offer. And because I thought the covers looked good as a series.

It’s a good solid Police story. I hesitate to say ‘Thriller’ as, for me, it doesn’t quite get there, despite the set-up. It is a good, well put together plot, not a real cliff-hanger with twists, but strong with a few surprising angles to it. I did feel, and it’s not giving anything much away, that the ‘other hostage’ cracked a bit too quickly. Might have worked when the plot was on the back of an envelope, but really irritated in book form. All in all, it really did feel like there was something holding the whole back, something missing. It could have and should have gone up a notch. Turned the tension up, looked a little more at the issues raised.

You can buy Good as Dead at The Book Depository

3 thoughts on “Review: Good as Dead by Mark Billingham”