AD1073. Under the merciless sun of the East, a dark force has risen – a Norman adventurer whose bloody and unquenchable ambition rivals that of King William himself. He has conquered his land, built his fortress and he has amassed his army. And now he has taken Constantinople’s ruler as his prisoner…

It falls to Hereward to rescue this precious captive. For the great warrior-in-exile and his spear brothers, it will mean mounting a raid that could prove the most daring of their lives. Assisting them in this task, will be an elite and legendary band of fighters, the Immortals – so-called because they believe they cannot die in battle. But it will not be enough – for enemies hide within the bloated, bejewelled heart of Byzantium: vipers who would spread their poison, who wish to see the English dead and who will strive to turn a mission that was at best dangerous into one that is now suicidal…

Before I opened the book, I really didn’t want to like it. I didn’t want them to think I could be bought by putting my (blog) name on the back. Did I mention they’d printed a quote from my review on the back? Well, that SPEESH there, that’s me, that is.

And yet, I failed. They won.

Well, you know the kind of book you know is going to be a beast right from the first sentence? This.

All the old memories and pleasure from previous outings with Hereward come flooding back right from the start. The Immortals really is everything you want from – not just a Hereward book, but from – a book. And, that’s a full stop back there. 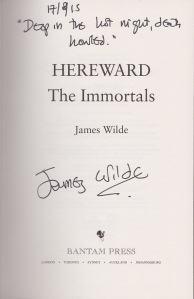 That Hereward left England and later journeyed to Constantinople to join the Varangian guard, seems to be common, almost accepted, knowledge amongst Historical Fiction authors, well, those I’ve read anyway. I’m doubtful that there is any hard evidence for this, though to be fair, there’s little hard evidence for anything to do with Hereward. The way I see that, is that it means there’s plenty to get your teeth into, for the writer and a reader. Only stick-in-the-muds are gonna get all po-faced on our asses and poo-poo certain ‘liberties’ but, as I pointed out to one, if you can’t point out that it didn’t happen and it is possible, then shut the fuck up and go back to writing your historical romances (Mr Wilde does address some of the limitations of the source material at the end of the book).

So, if you’ve been with James Wilde’s story so far, you’ll know that after being on the losing side at Hastings, and later at Ely, Hereford made a deal with William the Bastard, to leave England and never come back. Hereford seems intent on upholding his side of the bargain and, over the last couple of books, has made his way to Constantinople, intent on joining, with his loyal band of followers, the Emperor’s Varangian guard. They are prevented from joining by the animosity of certain guards with long memories and because they haven’t got the signing-on fees. This book sees the rage at the injustice of their situation, explode in glorious fury.

Hereward’s small band of Ely rebels, has got even smaller over the course of the last couple of books and continues that way here. However, the really interesting ones, Kraki, Guthrinc, Herrig ‘The Rat,’ for instance, seem to develop and fill out a little more here, come more out of the background, prove they are not the ‘Enterprise’ landing party member in the red shirt, and sometimes almost take equal billing with our main man. And, where there are good, honest warriors, there will always be…Ragener. What’s left of him anyway. He was the one that scared us shitless in the original trilogy and while he may have lost a few body parts, he’s certainly lost none of his menace. He is a superb adversary for the story, an unpredictable, predictably evil homicidal maniacal mirror to the well-meaning character of Hereward.

I’m not sure how old Hereward is here (I’m sure I could figure it out if I put my mind to it), but the point is there’s still lots of life in the character, literally and physically. Both in this story and, hopefully, for plenty of stories to come. There’s passion a-plenty. There are do-or-die, breathless, white-knuckles gripping the book battles, that will get the pulse racing, the heart beating, the nerves a-jangling. Desperate last minute, backs against the wall, no end in sight rescues and escapes against all the odds. The story itself feels like it’s balanced on a knife- an axe-edge, the whole way through. Like their fate could go either way at any time. Hereward The Immortals has it all…and is quite probably the most complete, certainly the most enjoyable, since the series began. Probably was as enjoyable to write as it was to read. Certainly hope so.

You can buy Hereward The Immortals at The Book Depository

Related reviews on Speesh Reads that you may find useful: