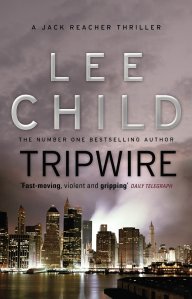 For Jack Reacher, being invisible has become a habit.

He spends his days digging swimming pools by hand and his nights as the bouncer in the local strip club in the Florida Keys.

He doesn’t want to be found

But someone has sent a private detective to seek him out. Then Reacher finds the guy beaten to death with his fingertips sliced off. It’s time to head north and work out who is trying to find him and why.

It does, in parts, feel like one of those where the author set out to write a long one. Meaning there is a fair bit of padding to make up some page numbers. I hate it when, for instance, writers post “up to 500,000 words!” Or, “reached my word count for today!” Don’t do it. You’re ridiculing the art of writing. It’s not a process, you’re not a machine (though some ‘writers’ of some of the American ’thrillers’ I’ve read down the years, probably are machines – but you’re not!) It’s like quantity matters, more than quality. There were plenty of signs of padding in the previous one, but this time out, they are (thankfully) harder to spot. Still, he did clearly think “this’ll be so many pages long, if it kills me!”

Long ones, do mean another thing, you have to have your interest held all the way through. It’s hard to read on autopilot. Harder than it is to write on autopilot, any way. This does hold the interest 99.9% of the time, which s good. Actually, I’d go so far as to say, that this is the best of the Jack Reacher series so far. To compare with others I’ve read recently, it’s not as edge-of-the seat gripping as I Am Pilgrim (very few will be, to be fair), or The Bone Tree, which was an 800 page monster, but would have been too short at twice that. Compared to Matt Hilton, whose Joe Hunter is clearly in similar territory, then I’d say the only difference is, Lee Child has sold more books. This is pressing up to third place in the afore-mentioned list quite nicely. It also leaves Reacher (I’ve not read further in the series than this one) with some interesting problems to solve later.

I enjoyed the book tremendously and I can well imagine that new readers could probably start here – there was a fair bit of new character information included in the beginning, that almost suggested a fresh start for the series. I can imagine this sort of book is looked down on by people who know about novels – who would no doubt describe this as a ‘book’ for instance, rather than a ‘novel’ (no matter what the Yanks have to put on the cover). However, if – as me – you read for enjoyment, to enjoy yourself, then Tripwire and Lee Child hits the spot right now.

You can buy Tripwire at The Book Depository