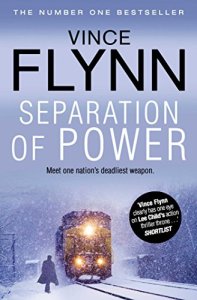 Iraq has a nuclear weapon.

The CIA has Mitch Rapp.

Israel has discovered that Iraq is close to entering the nuclear arms race and they’ve vowed to do whatever it takes to stop them. With the Middle East teetering on the brink of chaos, the US president is forced to react. The commander in chief’f secret weapon? Top counterterrorism operative Mitch Rapp.

Israel has given the USA only two weeks to take the nukes out. After that, they will launch an attack to destroy the weapons themselves. With the haunting spectre of World War III looming, Rapp must race against time and impossible odds – tearing through the deadly alleyways of Baghdad and the corruption-riddled streets of Washington DC, taking drastic measures against anyone who dares to get in his way.

The problem with writing modern, bang-up-to-date thrillers, is that they date. Very quickly. So, it’s probably best to look at the publish date before you read and pre-judge this.

In the great scheme of things, this is the one where Rapp and his girlfriend get serious. However, it’s not all bad news. The book is the best of Vince Flynn’s (I’ve read) so far. Or the best since the second one at least. It reads, with all ends nicely tied up, like the end of a series. What it is doing, is ending the setting up of the cast of characters and motives, the state of play in Washington politics and the hierarchy of the CIA and Government, that will be used as the fundament of the unfolding of the following books. That much is clear.

The good: Separation of Power takes quite an even-handed approach to the Israeli/Arab conflict, the Middle-East situation as a whole. No hint of any pre-judged ‘weapons of mass destruction are/aren’t there’ opinions either, especially when considering that Americans were absolutely certain they were, before they got in and found they weren’t. ‘The kind of thing Saddam would have’ thinking.

For me, it does raise the question of respect for the office of President. Americans do seem convinced that as soon as an idiot raises his (maybe her) hand and promises to look after more destructive power than is needed to destroy the Earth ten times over, to an invisible, non-existent ‘friend’ – he/she becomes an amalgam of Einstein, Lincoln, Mother Theresa, Isaac Newton, Sir William Marshall, Steven Hawking, and probably George Clooney (among others). Then, think George Bush (all of them), Ronald Reagan and (maybe) Trump. So, it’s not hard to figure that the much beloved by Presidential candidates ‘American People’s ideas of the solemnity of the office of POTUS, is based on his/her portrayal in films and books like these. Not reality. It certainly won’t be if they elect the shaved orang-utan Trump. It and they will be a laughing stock. They won’t realise this, but it’s true. “President Trump thought deeply, considered all angles and said with a heavy heart…” Yeah! Right. Thriller writers and film-makers will have to think again. No one will believe there could be a President like this in books like this. They’ll KNOW he is just a front for other people’s vested interests. It’s where a Monarchy wins every time. You know it.

Finally, there’s the back blurb saying ‘Iraq has a nuclear weapon, the CIA has Mitch Rapp,’ as though that is ‘nuff said.’ Problem is, given his failings/fuck-ups of previous books, if Rapp is ‘our’ (the US always thinks it’s problems must be the World’s) best, or only, hope – then we really are in deep shit.

There’s still no indication of why the ten years gap in books 2 and 3. It’s getting ridiculous now. Events in Rapp’s gap-years are alluded to, but are  maybe mainly used to justify why Rapp wants to get out? And the connection with the beautiful (aren’t they always?) assassin, Donatella.

Does the conflict with the girlfriend ring true? Not for me. Not if, as they are portrayed here, intelligent, grown-up, human beings. Remember the old WWII-time slogan  ‘Loose lips sink ships’? Rapp doesn’t. He, after unreasonable badgering from his reporter girlfriend, comes clean about pretty much everything! And the reporter girlfriend expects him to. Hang on a cotton-pickin’ moment there, Rapp – didn’t you sign some sort of official looking paper when you began all those years back? Hasn’t 11 years in the CI-fucking-A taught you anything? Rapp would and does, come down from a great height on anyone associated with him, the CIA and the US Govt suspected of or convicted of talking out of turn – when asked repeatedly not to, for example – yet forgets all this when the girlfriend wants to know when/if he’ll be back for tea. She definitely should know better. She knows she’s not going out with, soon to marry, a book-fucking-keeper. She can’t keep her mouth shut. That’s been proved. She’s a fucking reporter as well – reporters are paid not to keep their fucking mouth shut, for fuck’s sake! Rapp tries her with the perfectly reasonable ‘You know I can’t tell you,’ but she knows she can keep on at him and he will eventually crack. Instead of retiring gracefully in the knowledge that she could, if she did, she keeps on and on at him. Imagine. So, she finds out he’s going to Iraq after some nuclear plant under a hospital. Even if she doesn’t report this on the news, she’s having lunch with a mate who says ‘are you and Rapp coming over for lunch Saturday?’ ‘We can’t, Rapp is out of the country at the moment.’ A foreign agent at the table behind them, gives this to his/her boss, who put two and two together and…You know it! We’ve read whole novels based on flimsier plot twists than that! Sympathy for her situation, is something I do not feel. She’s (supposedly) a grown up – deal with it. Shit, or get off the pot.

Face it, Rapp tells her more about his job, than she tells him about hers’!

However, however, however, even after all that, Separation of Power is what Flynn has been working towards (I’m reading these books in order, here’s where I am, so I’m writing as though I read this when it came out), a pretty much perfect blend of politics, suspense and even – some action. The writing is good and taught and very nearly totally cliché free (there are a couple of phone numbers ‘punched in’) and given that you let some of the things mentioned above ride – it’s all still a cut or two above the majority of this ilk and all in all a very good place to be for launching the next one, I’d say.

You can buy Separation of Power with the cover featured above (don’t get the US version, they’re rubbish) at The Book Depository