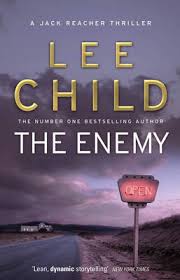 A soldier is found dead in a sleazy motel bed. Jack Reacher is the officer on duty. The soldier turns out to be a two-star general. The situation is bad enough, then Reacher finds the general’s wife.

This stomach-churning thriller turns back the clock to a younger Reacher. A Reacher who still believes in the service. A Reacher who imposes army discipline. Even if only in his own pragmatic way…

Well, it’s not ‘stomach-churning,’ that’s the first thing. Maybe if you’re a Sunday School teacher somewhere in the USA, but not for anyone else, in Europe for example,  anyway. It can’t be, if you think of it. It has to sell to his previous readers and appeal to more people who are still like his previous readers. It’s not going to dig itself a hole, marketing-wise, now is it?

There’s no real explanation of why this one suddenly takes us back to Reacher’s Army career. Nothing before has set his memories off, and I doubt if the next book will refer to it.

Its job is filling in background. Personal and career-wise. We find out about his brother and especially their mother. Some idea of how his heart is, back then anyway. Where his cosmopolitan background came from.

Younger Reacher? No different to how he is now. Maybe says a little more. Method-wise, the same. The premise of seeing how Reacher got where he is today, is something the book doesn’t really follow through on. All he is now, is how he was then. Maybe more of an eye for the ladies, again, but no real different. Not more wide-eyed, not more cynical. Not more of anything much he is less of now. It’s a good story, interesting enough, but still a hell of a wasteful book. Wasteful of paper and time. Not a waste of time, by any means, just wasteful in that it certainly could have done more with less.

You can buy The Enemy at Booksplea.se