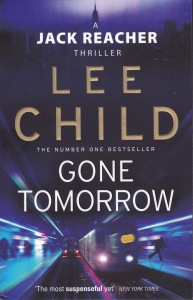 Suicide bombers are easy to spot.

They give out all kinds of tell-tale signs. Mostly because they are nervous. By definition they are al first-timers…

There are twelve things to look for.

New York City subway, two o’clock in the morning. Jack Reacher studies his fellow passengers. Four are OK. The fifth isn’t. He ticks off every bullet point on the list as the train brakes for Grand Central Station.

At least we seem to be finished with that teeth business that’s plagued the last couple of books.

The irritation here, is the padding. There always has been a lot of padding in these Jack Reacher books, but it’s developing into an epidemic nowadays and Gone Tomorrow takes it to whole new levels. I’d reckon Lee Child thinks of it as his style (like his style in the first two novels, was the one word, one line sentences. There’s still plenty of them, but he has managed to string more than 5 words together without a full stop in between nowadays. But it’s really not necessary. And irritating. “Get on with it!” As I’m shouting. He doesn’t need to spend so much time on the small things. He’s already convinced us that Reacher has an eye for detail and is very thorough. He can move on, surely? The result of all this padding and analysis, is it removes any last vestiges of tension and therefore excitement from the story. Stringing everything out, with Reacher contemplating every angle and every possible conceivable result, before he chops someone with a backhand to the neck, is an excitement hoover if ever you read one. These stories, in another author’s hands – or an editor with a bigger red pen and a pair – would really be something. But only half as long and therefore not in the airport house-brick section. Just think what a collection of Reacher short stories must be like…

Other things to note, to replace the teeth – what’s with Child and Crown Vic‘s? Everyone’s got them and everyone driving by is in one. And ‘K’ turns? ‘Three Point’ will do, thank you Lee. That and it’s clear he has invested in a new Thesaurus since the last book. Problem there, descriptions become even more of a shopping list. Not just what’s in the room(s) and where, to  l o n g lists of adjectives and verbs, where one would do.

Having said all that…I still like Reacher, he is likeable. More likeable than irritating, in the long run I suppose that’s what keeps people buying them. And a no nonsense way of doing what is needed. Like Mitch Rapp in that way. Just lower down the pay scale. There are some very decent plot and character surprises served up, mostly going to show up Reacher’s fallibility and how it affects him and of course, what that surprise does to us, which is interesting.

You can buy Gone Tomorrow at Booksplea.se