It’s just a voice plucked from the air: ‘The American wants a hundred million dollars.’

For what? Who from? It’s 1996, and the Soviets are long gone. But now there’s a new enemy. In an apartment in Hamburg, a group of smartly dressed young Saudis are planning something big.

Jack Reacher is fresh off a secret mission. The army pats him on the back and gives him a medal. And then they send him back to school. A school with only three students: Reacher, an FBI agent, and a CIA analyst. Their assignment? To find that American. And what he’s selling.

Night School takes Reacher back to his army days, but this time he’s not in uniform. All he must do, with trusted sergeant Frances Neagley at his side, is carry the fate of the world on his shoulders.

We’re almost off in Mitch Rapp territory here, as Lee Child adds an international intrigue strand to Reacher’s bow. Reacher has to cross the Atlantic (a couple of times, as I remember), going back to solve a problem in Europe, that could end in the destruction of western civilisation, all over the world. So, no pressure there.

The problem I have is…well, the name, Night School. There really is no point in the Night School of the title, as Reacher goes off on his own way, as usual, anyway. He’s never really been part of a team, and he doesn’t start here. The other ‘students’ are seemingly only used to explain the fast access to information they need to over come a plot problem here and there.

Like 61 Hours, I’m thinking, with this amount of build-up, the whatever it is the American is selling or has stolen, had better be a doozy!

There was one other thing, which I then recalled musing on in previous books. Apart from his colleagues in the army, and one or two others, the female characters are unbelievably dense. The questions they ask Reacher while he’s figuring things out, I mean. Even thinking laterally and trying to imagine why Lee Child has them ask questions that either a 5 year-old would think are ridiculous, or would make you, me and Reacher punch their lights out, were they sat her, right now – I can’t see why. It’s mostly the women, and there is absolutely no point in doing it. I’m afraid it’s just another way of Child padding out unnecessarily.

Otherwise, it’s actually pretty good, you should go buy it. 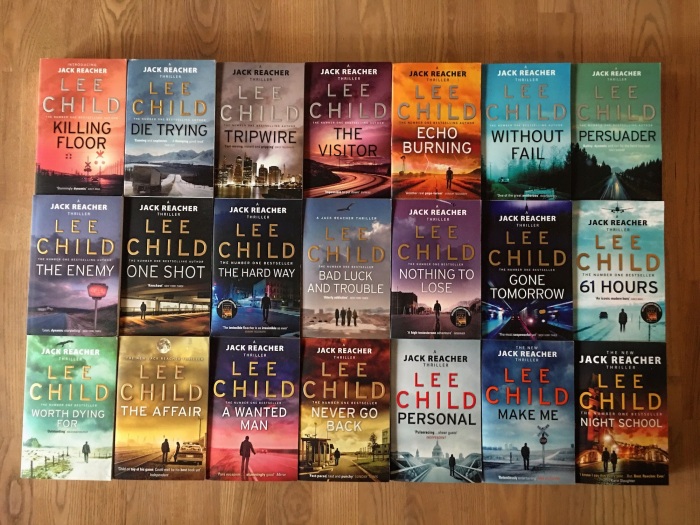 Note: Also, finishing Night School also means I’m totally up to date with all my Reachers. I’m not doing the short stories and I’m not getting the next one – out in the Autumn I think – in hardcover, I’m waiting for the paperback. To keep the set going, you see. So it may well be a while until I see Reacher again. Should be interesting to come back to him after a break.

You can buy Night School from Booksplea.se