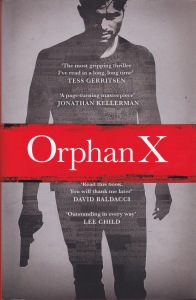 It was always the first question he asked. They called him when they had nowhere else to turn.

As a boy he was chosen, then taken from the orphanage he called home.

Raised and trained as part of a top-secret programme, he was sent to the worst places in the world to do the things his government denied any knowledge of.

Then he broke with the programme, using everything he learned to disappear. He wanted to help the desperate and deserving.

But now someone is on his trail. Someone who has issues with his past. Someone who knows he was once known simply as Orphan X.

Always a risk taking on a new series, when you’ve got the first couple or three bought and waiting. For me, anyway. What if the first one, in the first few chapters is rubbish. Oooh, it’s a long slog from there, eh? Fortunately, for me, with Orphan X, no such problems. This really is, as the cover blurbs are unanimous in suggesting, a really excellent thriller and a thrilling start to a thrilling series (That’s enough ‘thrillings’ – Ed).

Orphan X is an absurdly addictive novel. Not in an overtly obvious way, but more subtle. A real thriller, with a nice feeling of plausibility to it. The main character, Evan Smoak/Orphan X, is a lot better than you might expect from this kind of glossy-looking thriller. As all assassins are, he’s a perfectionist. But with a hint or two more humility and self-awareness than some I have read, recently. He knows his fastidiousness is almost an affectation, or something he’s learned, been taught, not really him. But he fully realises that it is that fastidiousness, bordering on obsession that keeps him alive in his line of work. There is a feeling of distance, between the real person and the Orphan X person, and he’s self-aware enough to see it. That, in my opinion, is really good writing. I’m thinking he’s a much more three dimensional character, already. Much more like you could imagine meeting, somewhere, sometime. Much more of the real world, the one I’m in, than just the pages of a generic thriller. And that too, elevates this book away from most of the also-rans.

There are, I detected, elements of Bourne, as the person of Orphan X is ‘built’ by a ‘black ops’ government agency, and in the respect of being educated, trained, by a ‘father figure,’ elements of Mitch Rapp in American Assassin and the next couple in Vince Flynn’s superlative series. Just hints though, Gregg Hurwitz has gone his own way, weaving his way assuredly through the successes and pitfalls of the thriller genre and created a really quite excellent new character.

Something more than I Am Pilgrim and not quite as fantasy-figure-like as Solomon Creed.

I was glued to the story and the characters, even the side characters are well-done, and having already availed myself of the second, I’m waiting until the UK version cover for number 3 is revealed – I think I know what it’s going to be, but I can’t be 100% sure just yet – then I’ll be getting that too.

You can buy Orphan X at Booksplea.se