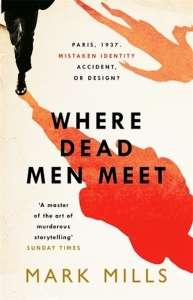 1937. Luke Hamilton – an air intelligence officer at the British Embassy in Paris . finds himself the target od an assassination attempt. A clear case of mistaken identity, or so it first appears. As Luke is hunted from Paris, through Germany and to Italy, moving across a continent sliding towards war, he comes to earn that the answers lie deep in a past that predates his orphanage. And the question he can’t answer is why they have come for him now? Having saved him twenty-five years ago?

Set against a vivid backdrop of Europe on the cusp of the Second World War, ‘Where Dead Men Meet’is a return to the superior intelligence thriller from the highly acclaimed author of the bestselling ‘The Savage Garden.’ 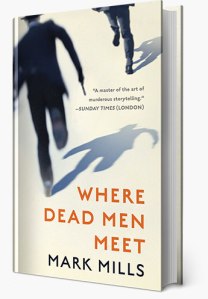 This is a thoroughly enjoyable, well-written story of intrigue and life or death deception, which races across Europe just before the outbreak of World War Two. I’ve not come up against Mark Mills before and I don’t know if this is a one-off, or the start of a series. I rather hope it is a one-off – it certainly reads as a self-contained novel – as that’s what we need just now. More one offs. Instead of the ‘first in an exciting new series…’ crap we’re constantly bombarded with these days. You know it’s the idea of marketing men, rather than authors.

The premise, that the Englishman Luke Hamilton, thinks he knows who he is, but doesn’t at the same time, is really well done. The accompanying characters stand up as well, with the love-interest well-written, rather than “look, you have to have a woman in it!” I am, of course, a sucker for novels set inbetween the wars, whether they relate directly to WWII or not, and this one doesn’t, not directly anyway. They are on the run from something else I guess – without giving too much away.

I say, I miss one-off books these days, and hope this isn’t the start of a series. One-offs would seem to be the more difficult type of story to write, as everything you need has to be placedd within the one volume, without hitting you over the head with background and whatnot. This book, if it is a one-off, accomplishes the task really well indeed. He’s got a way to go before he can rival The Incomparables: David Downing and Philip Kerr, but he’s showing the right signs.

You can buy Where Dead Men Meet from Booksplea.se