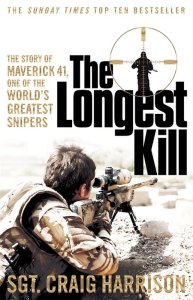 It takes courage and mental strength to be a successful sniper, to dig in for daysas you wait for your targets, to stay calm on a battlefield when the enemy are determined to take you out. Craig Harrison has what it takes. In Afghanistan he saved the lives of his comrades with the longest confirmed sniper kills – 2,475 metres.

In this unflinching autobiography, Craig takes us into the heat of the action as he describes his active service in the Balkans, Iraq and Afghanistan, and gives heart-stopping accounts of his sniper ops as he fought for his life on the rooftops of Basra and the barren hills of Helmand province.

Craig was blown up by an IED in Afghanistan and left battling severe PTSD. After his identity was revealed in the press, he also had to cope with Al Qaeda threats against him and his family. The Longest Kill is a gripping study of a soldier who has paid a high price for his heroism.

Obviously, the headlines and the ‘come on’ is concerned with the longest ever confirmed sniper kill. Though, if you’re thinking that the whole book resolves around this, or even leads up to it, you’d be wrong. Obviously, it’s in there, but – in typical British Army fashion maybe – it isn’t really made that much of. The book is about Sgt Craig Harrison, how he came to join the army, how he came to be a sniper and how he came out of the Army. It is, again a British trait possibly, written very matter of factly. We British will understand a lot of what isn’t said, the Americans might well be struggling. And not only over how long 2,475 metres is. They probably won’t understand either, why Clint Eastwood hasn’t made a film about him, if he’s that good.

You could – could – take issue with the ‘hero’ part. I don’t think Craig would want to be called a hero, he was doing his job. And that’s a big point, it is a job, no matter how you look at it. He deserved help after the Army, and there should be more help, that no one, least of all me can deny. However, shpouldn’t there also be more help for those, the family, of people who fall off scaffolding and die? The fighting for his country also is a bit rich, given how long away Iraq, Afghanistan etc are from the UK. Surely, the people in Afghanistan, like it, like them, or not, are fighting for their country a little more than he is?

You get the impression that he saw it as being out there helping his mates survive and they were helping him. He writes of it all as very much a team effort all the way through and doesn’t seem to want any special handling. Apart from wanting the Army to keep their promises and journalists to keep theirs and keep his name out of the papers. That’s where you really want to go punch someone in the face after reading of the ‘we couldn’t give a flying fuck’ treatment he got at the end.

You can buy The Longest Kill from Booksplea.se

2 thoughts on “Review: The Longest Kill: The Story of Maverick 41, One of the World’s Greatest Snipers – Craig Harrison”