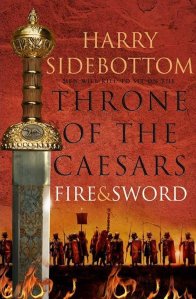 Throne of the Caesars 3

The year of the six emperors.

The Empire is in turmoil. With the Gordiani, father and son, dead in Africa, the tyrant Maximus Thrax vies to reclaim his throne.

The senate, who supported the revolt of the Gordiani, must act quickly to avoid the vengeance of Maximinius. They elect two senators to share the Imperial purple. But fighting erupts in the streets as ambitious men call for violent revolution.

Can the new Augusti hold the city together as the Emire’s farthest territories fight off bloody attacksmfrom the Goths and the Persians in the east?

In the north of Italy, Maximinius descends on Aquileia. Against the odds, Menophilus, an old friend of the younger Gordian, prepares to defend the town. In one of the greatest sieges of the Empire, its fate will be decided in a fight for victory, for revenge, for Rome.

Filled with intrigue, betrayal and bloody battle, ‘Fire & Sword’ creates a magnificent world built on brutality and political games, where no one os safe from retribution – not even those who dare to rule.

Just when you were thinking the year of the four emperors was enough…we have six! Those Romans got through more leaders than Donald Trump, eh?

And, fortunately for me, this time, the “Rome was in turmoil” tag is fully justified. Though, that again reminds me of something. I can’t get around the good old-fashioned Historical Fiction staple, of the men in power – usually either the subject of the stories, or prominent antagonists – rubbishing, deriding, dismissing, the average person of Rome, the people who had to live in the city because they weren’t soldiers or aristocracy. But doing everything in their power to placate them, keep them satisfied, keep them calm. No one with power, from Emperors and down, can seem to make any kind of a decision, without having to consider what the reaction of ‘the mob’ would be. The Mob. Not the Mafia, but the average Joeus in the street. The one who is a baker as a trade, and would go up against the Praetorian Guard, armed with a sharpened baguette…You know what I mean. That does bother me sometimes, as perhaps existing more in other Historical Fiction books, than in real life.

So, Harry was saving the best to last. Through a slow build-up to volume three, he is now, I have to concede, reaping the benefits of the earlier background spadework. There is still a lot to cover here, those Romans didn’t do anything that will fit in a book without some editing down, but there’s never a feeling of Harry spreading himself too thin. Quite the opposite, it’s all very tight, often terse, but with a real feeling of depth and solidity – and a few surprises (if you can keep yourself away from Wikipedia whilst you read this. I will admit that throughout the series, maybe against my better judgement, not to mention historical fact, been quietly rooting for Maximinius. I imagine too that I’m not alone. Despite him having been Emperor throughout, just about, the whole series, he always actually seemed like the underdog. The one actually trying to do something for both restoring the idea of ‘Rome,’ and restoring Rome to its rightful dominance. That’s often the trait of outsiders. They often both know and care more about their adopted country, tan those born there. Think the Danish Citizenship Test. People seeking citizenship have to pass (amongst other things) a test, comprising questions about Danish history, culture and current events. In test after on-line test, those seeking citizenship score higher, than home-grown, born here, Danes.

Fire and Sword is, one of Harry’s best books. Not just the best in the Throne of the Caesars series, I think. And it really sets me up for some nice anticipation for The Last Hour.

You can buy Fire & Sword from Booksplea.se