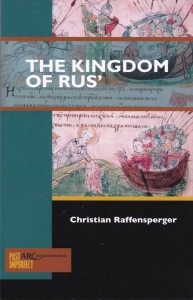 As scholarship continues to expand the idea of medieval Europe beyond “the West,” the Rus’ remain the final frontier relegated to the European periphery. ‘The Kingdom of Rus’ challenges the perception of Rus’ as an eastern “other” – advancing the idea of the Rus’ as a kingdom deeply integrated with medieval Europe., through an innovative analysis of medieval titles. Examining a wide range of medieval sources, this book exposes the common practice in scholarship of referring to Rusian rulers as princes as a relic of early modern attempts to diminish the Rus’. Not only was Rus’ part and parcel of medieval Europe, but in the eleventh and twelfth centuries Rus’ was the largest kingdom in Christendom.

Not for the fainthearted, this.

It’s not what I thought it would be – a look at how Swedish Vikings began the country we now called Russia (and Ukraine, etc). It looks at a later period in the early history of Russia, when it was still known far and wide as Rus. The guy’s angle is to convince modern day historians and scholars, that earlier historians and scholars, were wrong to label what he wants to call Kings, as Princes.

There have been many books and journal articles written over the course of hundreds of years that have designated the ruler of Rus’ as a “prince” or “duke” and thus the territory he rules as a “principality” or “duchy.” On rare occasions, there have been scholars who have differed from this consensus, such as Andrzej Poppe, who used “king” for the ruler of Rus’, with the rationale that:
Since, in early Medieval Europe, the Slavic title kniaz’ was equivalent to the latin title rex, and since the Rus’ian rulers are constantly referred to in medieval sources as reges, I break here with the historiographic tradition of the nineteenth and twentieth centuries and return to the medieval usage and meaning of this title.

So, you didn’t know that this was a problem that needed solving? Neither did I. You’d never heard of the word ‘kniaz”? Or ‘historiographic’? Join the club.

From the quote above onwards, he assembles an impressive amount of evidence, largely circumstantial, as the whole thing is dependent on translation, to ‘prove’ his case. It does, unfortunately for Viking hunters like me, cover the later than the Vikings, earlier than the Russians, period of history, so it was a bit of a struggle to get through. I’m sure that to its proper market, it is absolutely riveting, but to you and I, not so much.

You can buy The Kingdom of Rus’ from Booksplea.se