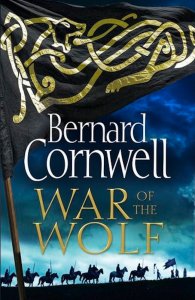 At the fortress of the eagles, three kings will fight…

Uhtred of Bebbanburg has won back his ancestral home but, threatened from all sides by enemies both old and new, he doesn’t have long to enjoy the victory.

In Mercia, rebellion is in the air as King Edward tries to seize control. In Wessex, rival parties scramble to settle the identity of the next king. And across the country invading Norsemen continue their relentless incursion, ever hungry for land.

Uhtred – a legendary warrior, admired and sought as an ally, feared as an adversary – finds himself once again torn between his two heritages: fighting on what he considers the wrong side, cursed by misfortune and tragedy and facing one of his most formidable enemies. Only the most astute cunning, the greatest loyalty and the most spectacular courage can save him.

For decades, Uhtred has stood at the intersection between Pagan and Christian, between Saxon and Viking, between the old world he was born into and the new world being forged around him. But as the winds of change gather pace, the pressure on Uhtred as father, as politician and as warrior grows as never before.

I’m sure I read in one of the earlier volumes, that Bernard Cornwell was going to write the story (of one of his ancestors?), up to the point where Uhtred recaptures/reclaims his family ‘home,’ the castle at Bebbanburg. I really can’t remember which of the early books it was, but I’m convinced he saw it as a limited number (and not determined by Uhtred’s death, obviously) series, rather than the open-ended, continuing for ever, sort. Uhtred captured and occupied his ancestral home last time out, so it is a bit of a surprise to be here with the eleventh in the series, one after he has done what he said he was wanting to do.

I would imagine that the success of the TV version of The Last Kingdom – recently renewed for a fourth season, I think – may have played a part. The TV peeps and the publishing peeps may have had a word in his shell-like and ‘persuaded’ him of the benefits of further Last Kingdom books – because there’s no mistaking that the series doesn’t need to end with War of the Wolf either.

So, is this an add-on, is it rushed, is it more of the same, just in new packaging for late-comers. Well, yes and no. There’s no doubt that BC has this series lark down to a fine art, he churns the things out regular as clockwork and two in between. She runs the risk of spreading himself a bit thin, you ask me, but there seem to be plenty of people out there who are in the market for a regular dose of BC and he has achieved guru status, with references and comparisons to him and his work all over the place. His books are the Gold Standard against which all other mostly for boys, swords drenched in blood all the way up to the arm, Hist Fic is measured. It gets so any (negative) criticism of his books feels churlish – “yeah…but it’s Bernard Cornwell!” “Oh, well I see, I must be mistaken then.” *order in universe re-established*

The building blocks of a Bernard Cornwell’s 2018 book are there: The last, or last but one paragraph ending with ‘And.’ Ending a chapter with the last line starting with ‘then…’ for something that you hadn’t thought was going to happen, having read the previous. He has always had Uhtred referring to himself as a ‘fool.’ A fool for thinking this, for believing that, for doing the other, for your lovin’ as well, I’d wager. Though in Wolf, it reached epic proportions. I lost count of all the times when someone was a fool, or something was foolish, but suffice to say it was several times on a page at one point and I began to speculate that if all the fools and foolishes were taken out, the book would only be half as long.

But, seriously…it is another Cornwell’s 2018 Last Kingdom book, of that there’s no doubt. It isn’t bad, though I doubt it is going to be catapulted into the top three in the series by anyone who has read from the start. There is – as always – a preciseness and economy about BC’s writing, characterisation and plotting, and that’s here as well. Uhtred has always been a world-weary sort of character and now he’s reached elder statesman status, there’s both the expected “is he still alive?!” however, Uhtred himself has added “am I still alive?!” Though the prevailing feeling is of ‘the fools must be fools because they haven’t killed an old fool like me yet.’ Uhtred has always been a tankard half empty sort of guy, but in Wolf, when you read it and without giving anything away – if he didn’t have bad luck he’d have no luck at all. All in all, it’s good, you won’t be disappointed if you’ve read the previous volumes, but there are better.

You can buy War of the Wolf from The Book Depository