From the cover:
In the cold harsh winter of the Canadian Prairies, a secret is about to be unearthed. Medical resident John Mueller finds himself serendipitously in possession Of a professor’s coveted research. On the run, John evades enemies and authorities, unsure of who he can trust along the way.

John must decode the professor’s past in order to understand the magnitude of what he has uncovered. While searching for explanations he ignites a new romance and rekindles an old one.

But as John begins to realise the magnitude of his discovery, the ultimate decision of how to proceed with this knowledge is far from clear. As he struggles to predict the ramifications of the research, he will ultimately shoulder the responsibility of deciding whether its knowledge will benefit humanity or accelerate its path to destruction. 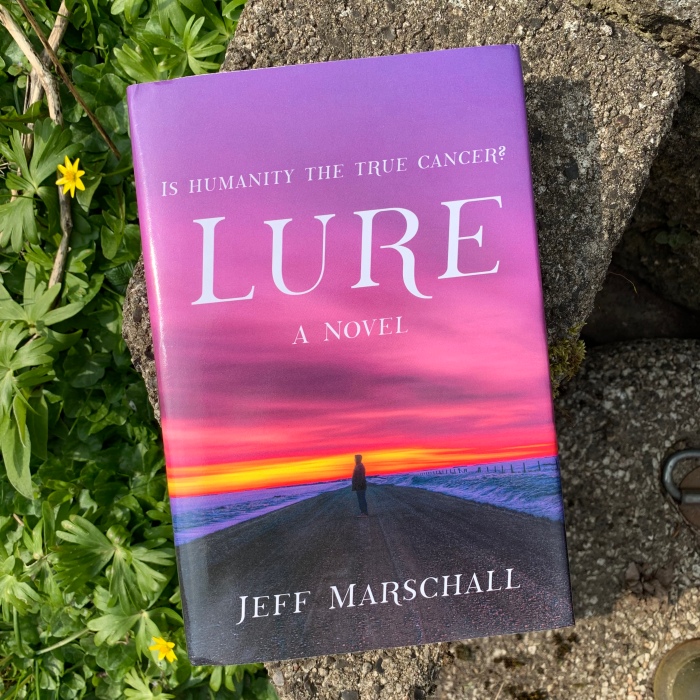 From the strapline above the title on the cover, you are pointed, maybe, in the direction of what the central ‘discovery’ might be. There are a couple of other clues in the blurb I’ve included above. But that didn’t give me much of a clue as to what the central theme of Lure actually be. Lure, having thought about it and why Jeff Marschall might have chosen such a – having now read the book – seemingly oblique title; thinking about it now, and while I work at my day job on a Danish ‘blood sickness’ hospital ward…It is something I have thought about before, and I can now see exactly why it was chosen and it is just perfect – pretty much as is the book.

The whole story flows along just right, sometimes at a breakneck pace, sometimes slower and considered, there are some surprises, some provocations, some thrills, some shocks and a really well done romance (better than mine have generally been, anyway). If the start of the romance is a bit quick. Though it may just be that my experiences have been somewhat slower burning than John Mueller, the lucky, lucky bastard.

The basic premise, what is behind and drives the plot and events in Lure, is the temptation of something that seems like a no-brainer “YES!” but then, after some further thought to maybe not quite so advantageous as first appears. A gift horse humanity wouldn’t but maybe should, look in the mouth. The one aspect does have a little ‘conspiracy theory’ feel to it and is, like many of them, fairly easy to pick a huge great hole in. I’m not going to give the (whole) game away, don’t worry. Let’s just take for example 9/11:

I’m no structural engineer, au fait with burn times for strengthened steel and all that, however…what I do know is that no one, not one person, not one (1) single person at any time since, at any level of the supposed ‘conspiracy’ has ever come forward and said “it was me.” or “I was in on it.” or “I know the people who, the weekend before, while the elevators were being renovated, carried in, avoiding all and any video cameras, enough explosives to bring down both towers, and had enough time to place them in demolition expert-type places, and hidden so well that no one, not one (1) person noticed they were there!” You’ve seen that in a headline. Not. And the whole thing was organised while George Bush Jr was President. We’ll leave that there…and the no one has ever come forward, can be applied to the most of these similarly preposterous conspiracies. Try it.

But I digress. The assumption as well, of what the consequences of the ‘big idea,’ I also found a little strained and I wouldn’t be able to go along with the logic of it. But none of this is in any way a deal-breaker. Because the way the story is told, the plot and the action, isn’t dependent entirely on you buying in to the consequences of what John Mueller has found. Or that someone else has found and others want to keep hidden more accurately.

There is a freshness to the story and the presentation, the love story/stories (after the quick start!) is convincingly done (if quick!) and meshes in with the rest of the plot very satisfyingly, I was kept guessing as to the what and the who right to the end – though I will claim I never liked that person, right from when they first appeared. The changes in location, the sometimes bewilderment of the main character, and some of those around him, were quite natural, never strained and fitted into the whole exceedingly well. Every time I began to think, “erm…just a moment” there came an explanation, that worked.

Lure is a very nearly perfectly plotted and written, intelligent thriller with an important, even provocative, message. A refreshing improvement on many, many of its contemporaries from over that side of the pond. I’m certain there are many more excellent books to come from Jeff Marschall. Get in on this one now.

Lure tempted me, and then rewarded me with a superb book.

That’s a clue to the meaning, btw.

You can buy Lure from Amazon