From the cover:
Balomar, King of the Marcomanni and leader of the united army of the tribes, broods and drinks his way through the long winter as his alliance falls apart. He won great fame when he destroyed the Fourteenth legion and brought his army to Italian soil. Rome will not let his victory go unanswered; new legions have been formed, and their spear tips point north.
Elsewhere Albinus braves the harsh weather and tribal hordes as he searches desperately for Licina, his lost fiancé. Once more he must play dice with Fortuna as he launches himself into the iron storm.
For Rome, and his father’s shade…

From the title to the very final word, War In The Wilderness is a quite magnificent book. One that delivers in spades and has you hmmm-ing and ‘ah, yes’-ing and guessing all the way through – and long afterwards.

Much different from how I expected after The Centurion’s Son (Book One in The Chronicles of The Centurion’s Son). Well, maybe ‘different’ is the wrong word, it went in a different direction than I thought it would anyway. Several different directions (you’ll need to read it) and that turns out to be much better than my inadequate thoughts of this kind of thing. Wilderness (as we professionals are calling it), is more. Much more. More intricate, more character-driven, more broader…ahem, well, more of what we or any Historical Fiction reader really wants from their books.

As I say, I feel Wilderness is about character growth and development. Albinus grows into a soldier that, he finds, his father would have been proud of. Maybe it wasn’t his intention, but being his father’s son, it comes naturally. He finds then, a respect for his father that was perhaps missing before he started out on all this. By understanding – through his own experiences of fighting and leading men, and being at the sharp end generally and literally – and through the comments of soldiers who knew his father. I don’t think he now wants to be his father – he always wanted to be his own man, not his father’s ghost – but he is now much more comfortable with being his father’s son, in his own skin and with both their pasts. Through knowledge comes understanding and respect.

In terms of developing characters who have and hopefully will continue to have a strong influence on the story, there is the former soldier turned sleuth, shall we say, Calvus. He is a wonderful addition to the growing  list of memorable characters, he may be missing a hand, but he’s not lacking in the mettle and loyalty stakes. I’m hoping for big things from him in future book(s).

Licinia shows new depth, even hidden depths (that I’m certain no one saw coming). She is an equal partner to Albinus in driving the novels now, not mere love interest, as I might have suspected. She in a way, symbolises the whole book’s hidden depths – more corners, more crooks and nannys, more secrets trying to come to light and life, more nuance, more sharp things being placed where they shouldn’t. 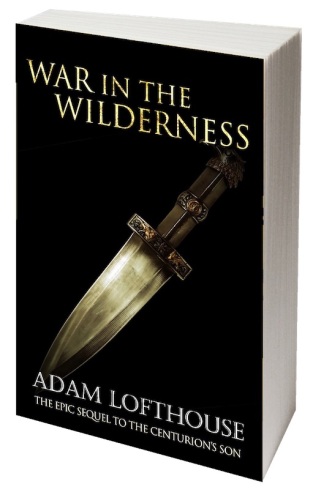 of a bitter sweet finale. Where you can practically see the ‘to be continued’ come up before your eyes as you look up to gather your wits again.

War In The Wilderness is no holds barred, vivid Roman entertainment, probably the next best thing to actually being there, and in Adam Lofthouse we have, in my opinion, arguably the Roman Historical Fiction genre’s hottest new young property. In just two books, he has created a thoroughly believable set of scenarios and a cast of characters to care and be concerned about. All set in a thoroughly convincing evocation of the Roman world of the time.

You can download a proper Kindle version, not the bloomin’ PDF I struggled through of War In The Wilderness (and The Centurion’s Son (that is at least available in paperback as well)) from Amazon