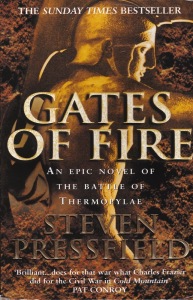 Go tell the Spartans, stranger passing by, that here, obedient to their laws, we lie.
Nearly 2,500 years ago, in 480BC, at a bleak pass in a far-flung corner of eastern Greece, three hundred Spartan warriors faced the army of King Xerxes of Persia, a massive force rumoured to be over a million strong. Their orders were simple: to delay the enemy for as long as possible while the main Greek armies mobilised.
For six days the Spartans held the invaders at bay. In the final hours, their shields broken, swords and spears shattered, they fought with their bare hands and teeth before being overwhelmed. It was a battle that would become synonymous with extraordinary courage, heroism and self-sacrifice. Its name was Thermopylae.
Gates of Fire tells the epic story of those legendary Spartans: the men and women who helped shape our history and have themselves become as immortal as their gods.

Ah, Memphis; home of Elvis and the Ancient Greeks…erm…

Most people who know anything about anything, know at least a little about the legend of Thermopylae and the 300 Spartans who fought there against overwhelming Persian odds back in the time of Ancient Greece. Of course, if you’ve seen the film 300, you’ll know roughly the story, but Gates of Fire takes it on to a whole different level.

‘Gates of Fire’ (Thermopylae is Greek for ‘hot gates’, after the hot springs found there) uses what is known of the battle, immediately before, during and immediately after, and fleshes out the available facts, with background, characters and lots of personality. Having already read The Spartans. An Epic History, by Paul Cartledge, I knew something of the Spartan’s history and traditions beforehand, so I can vouch for the authenticity of the description of Spartan society, customs and fighting techniques.

It’s written as though one of the Greeks has survived and though gravely injured, is telling the story of the Spartans and their preparation for and conduct during the battle, for later presentation to the Persian king Xerxes.

It is a thoroughly captivating book, well-written and packed with detail and interesting characters. The book builds nicely throughout, leading to the climactic battle at the pass of the hot springs. The description of the fight scenes in the final battle is superb, gripping and well-written. Of course, I’ve no experience of fighting in such a battle, but it seems very realistic, you get what seems like much more of an idea of how – apart from anything, how dirty and thoroughly exhausting – it must have been to take part in such a battle, than many of the other historical novels I’ve read. I thought it was a really good, thoroughly enjoyable, absorbing read.

*Of course, there weren’t only 300 Spartans fighting at Thermopylae. There were thousands of other Greeks from other Greek city states in the battle as well. Even the 300 Spartans is a little doubtful. In The Gates of Fire, he does say that 300 are chosen to go to the battle. On the third day of fighting, the Spartan king Leonidas, on learning that his force is about to be surrounded, by Persians coming round to the rear of the Thermopylae pass, sends away the majority of the other Greek forces. Some refuse and so stay, but in this book, obviously at this point, there are a lot less than 300 Spartans still alive. However, some other sources suggest that over 1,000 Spartans went to start the battle and that when Leonidas sent away the Greek forces, there were just 300 Spartans left at that point. Confusing.

You can buy Gates of Fire from The Book Depository

One thought on “Review: Gates of Fire: An Epic Novel of the Battle of Thermopylae – Steven Pressfield”