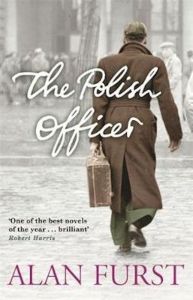 From the cover:
September, 1939. The invading Germans blaze a trail of destruction across Poland. France and Britain declare war, but do nothing to help. And a Polish resistance movement takes shape under the shadow of occupation, enlisting those willing to risk death in the struggle for their nation’s survival. Among them is Captain Alexander de Milja, an officer in the Polish military intelligence service, a cartographer who now must learn a dangerous new role: spymaster in the anti-Nazi underground.
Beginning with a daring operation to smuggle the Polish National Gold Reserve to the government in exile, he slips into the shadowy and treacherous front lines of espionage; he moves through Europe, changing identities and staying one step ahead of capture. In Warsaw, he engineers a subversive campaign to strengthen the people’s will to resist. In Paris, he poses as a Russian poet, then as a Slovakian coal merchant, drinking champagne in black-market bistros with Nazis while uncovering information about German battle plans. And a love affair with a woman of the French Resistance leads him to make the greatest decision of his life.

The period between the wars, especially the later period (we’re of course talking Europe here) in the run-up to World War II especially in Eastern Europe, fascinates me. This is where Alan Furst’s excellent novels are set. According to the introduction information, he has travelled and lived for many years in France and eastern Europe, though reading his books, you’d find it hard not to believe he wasn’t transported in a time-machine, directly to today from Europe of the late 1930s.

The Polish Officer is part espionage novel and part fascinating look at ordinary people being forced to understand extra-ordinary situations. Situations made all the more extra-ordinary as their optimistic, post-World War I world is torn apart by forces beyond their understanding and, more importantly, beyond their control. It is surely a fictional companion piece to Max Hastings‘ All Hell Let Loose.

I found this an absolutely absorbing novel. By far the most satisfying Alan Furst novel I’ve read so far. It is set in Eastern Europe, in Poland, at the outbreak of World War II. The main character is drafted into Polish Intelligence, while the war causes the world around him to collapse. He and his colleagues try to re-establish their places in the new world and determine how the future of their country might look. Being Polish, they of course know that however things turn out, it’s probably going to be largely out of their hands and that other, bigger and more powerful, powers will determine what happens to the Poles and so their job is to try and make the best of it, while also trying to make sense of it all.

He is sent undercover through Poland, to France, to Spain, to England and back to Poland where the Nazis are now on their way into Russia and the world is turning upside down once again. As i said earlier, I think the book is about people trying to make the best of situations that are largely out of their control. They are trying to remain in control of their lives, while realising that it probably isn’t possible.

This is a thrilling, tense, satisfying book. There are many absorbing vignettes, many interesting characters, many thought-provoking episodes, all linked by the Polish officer of the book’s title, who is, as he says at one point; “…a wanderer, somehow never home.”

You can buy The Polish Officer from The Book Depository