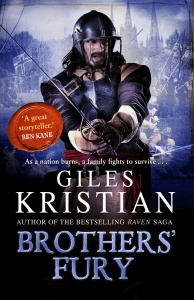 Rebel.
Cast out by his family, Tom Rivers returns to his regiment. His commander believes the young hothead’s contempt for authority has no place in his troop. But to a spymaster like Captain Crafte, Tom’s dark and fearless nature is itself a weapon to be turned upon the hated Cavaliers and used to strike at their very hearts.

Renegade
Raw with grief at the death of his father, Edmund Rivers rejects the peace talks between Parliament and the King. He chooses instead to lead a band of marauders across the moors, intent on exterminating rebel forces like the vermin they believe them to be. But Prince Rupert recognises in Mum a fellow child of war and has other, no less daring plans for him.

Huntress
Her heart broken following the deaths of her beloved Emmanuel and her father, Bess Rivers takes the hardest decision of her life: to leave her son and Sheer House and go in search of the one person who might help her re-unite her family. Risking her own life on the road, can Bess douse the flames of her brothers’ fury and see them reconciles?

Brothers’ Fury continues Giles Kristian’s thrilling and acclaimed story of the Rivers family, whose lives are turned upside down by that most brutal and tragic of wars –  the English Civil War…

Impressed doesn’t quite cover it. Doesn’t in any way come close.

It’s been a couple of years since I read the first book, The Bleeding Land. I wasn’t sure I could take any more of the English Civil War for a while after that. It’s never really been a period I’ve over interested myself in, maybe because it reminds me of what we had to study at school. Giles, fresh off the back of a successful Viking saga with the Raven, launched his new series with a flourish, followed it up with Brothers’ Fury, then…nothing. Except, a sudden return to the Vikings, where he is currently in the middle of a prequel saga to the Raven books (I haven’t read them yet, so don’t press me too much for details). Why? Well, the obvious is that the Civil War stuff didn’t sell. The end of Brothers’ Fury is set just fine for a third instalment, and I’d bet it’s sat there in a drawer at Kristian Towers ready to go. However, while the book might be ready for the readers, the readers don’t seem to have been ready for Giles writing about the Cavaliers and Roundheads. I’d say they’re not ready for Giles not writing about Vikings. They should be. They’re missing out on an unbelievably good story, sequel, series.

So, through reading the start of this superb book, I’m suddenly thinking “Why have I waited so long? O why, Lord, why?!” Then I got all caught up in the story and carried away and stopped worrying and started enjoying. So what’s your excuse? Don’t like enjoying your reading? Don’t like involving, invigorating exceptionally good storytelling? Gone mad? Still stuck on Vikings?

You’re familiar with the style, there’s no learning curve (even if you haven’t yet started the first one) either with the period or the characters, you’re drawn immediately in and the story then focusses in on one family, the Rivers and the English Civil War. As the blurb on the back says, the warring ideologies cut across family and friends and often set ‘brother against brother’, as here. I’d be hesitant about saying that it cut across the class divide, as the non-aristocrats had never had real power (not since just after the Black Death anyway) and would perhaps have seen the Parliamentarian side as being more in tune with their aims than the Royalists. The Royalists of course, want to keep the status quo. As they would, having ruled the country as far back as anyone can remember. In a similar situation to the Parliamentary ‘democracy’ we have in Britain now, where talking about reforming the electoral system is a non-starter – turkeys will never vote for Christmas.

Unless I’ve misread it completely, or read too much into it (it can happen), Giles does seem to put over that the ‘rebels’ are fighting to give themselves a better future. The Royalists are fighting them, to put them back where they were. To put the serfs back in their place. Where the Royalists know they belong. We’re on the cusp of change (again) in English history here and the only ones fighting to move society forward not back, are the Parliamentarians.

The way I read it, Giles has maybe thought about the tale of the fox running after the rabbit and giving up. The fox is chasing the rabbit for his lunch, the rabbit is running for his life. For the Parliamentarians, it’s life or death. If they didn’t fight, they’d remain in the death grip of the Royalists, if they lose they’ll be surely killed by the Royalists out for revenge. For the Royalists, it feels like it’s more like sport. See some of the hunting similes used here by Prince Rupert, for instance. Rupert, as the name suggests (!), represents all that is dislikable about the Royalist side. “Those traitors would raise arms against their king!” Arrogance born of privilege, bred of contempt, not earned. A right to rule, maybe not quite god-given, but it was in the past, so shall it be in the future. There’s also a feeling of shock amongst the Royalists, because they cannot come to terms with the Parliamentarians questioning the status quo and their right to rule.

The Royalist in the Rivers’ family, is Edmund. Or ‘Mun’ as he is pretty much always called here. Quite apart from the daft shortened name (I’d have gone for ‘Ed’ if only to stop me reading ‘Mum’ every time), he is (ironically) puritanical. He tries to be a bad boy, but his heart is still in the wrong place to pull it off convincingly.

The two Rivers’ sister, Bess, does feel a little off-the-shelf from the Hist Fic general store, Women section. A little cut out and keep. She was last time out as well. You meet her in many books of this era/period. The Wars of The Roses books by Derek Birks, in parts. Actually, the woman/women do actually have an important role to play. They are there for the practical things in life, the link and the common sense in between the two sides. Of course she’s irritating as all women in books like this who do that are, mainly because she wants them to stop all their fussin’ and fightin’. And be friends. One happy family again. Damn them! There is of course a time and a place for that – it’s after the third volume in this trilogy has finished, for example.

For me, the book actually revolves around the other Rivers brother, Tom. He seems the more interesting character – the good boy gone bad always is. He is the one who is going against his background and upbringing in siding with Parliament rather than his family’s background and heritage with the Royalists. He is the one following his heart and conscience, not just his pre-programmed, pre-determined duty. It’s him too that wants to break his own shackles. Yeah, I went completely la-la reading this.

Everything builds to the second half’s two huge battle scenes. A huge battle at Bristol, then another at Newbury. Newbury was a surprise, as I was done in, nerves in shreds after Bristol! It’s here that the book really raises itself above most everything else you’re likely to read. Previously, the book has been quite tense, the skulking in the dark parts and intriguing in the outcomes of various physical and mental conflicts. But that’s nothing to how well-handled – well-marshalled – the enormous battles at Bristol and Newbury are. I didn’t feel like I was reading. I was watching a video of the fighting in my head. Vivid, tense, thrilling, nervous, all hanging on a knife-edge, ups and downs, ebb and flow, uphill, back down. All this and more. And relentless. The constant pounding action, the no way out unless we win, this is only gonna end with our end, why won’t they stop, on and on, we must go on and on…All means these two are quite possibly and probably, the best, most involving battles you or I will ever read. Any period. I can safely say I’ve never read the like, or been affected so much. The next best/worst thing next to actually being there, as I thought more than once. This is writing at the absolute peak of the fiction genre. Not just Historical Fiction, Fiction.

This series should not be overlooked or overshadowed by his Viking series, as I think Giles (also) feels it is. I think it is quite probably his best work (though I’ve yet to get stuck into the Raven prequels). It’s maybe more difficult to write for this period than you or I would at first think. Than writing about Vikings. Because there is more documentation, there’s more of a framework to fit the story to and of course, more chance of clever-dicks popping up saying ‘that sort of thing couldn’t/didn’t happen!’ More than clever dick-esses popping up and telling you what actually happened in 1066/7, for instance… Less lee-way, artistic license than further back. So much more impressive to weave a new story in and out of old, established frameworks.

On the evidence of Brothers’ Fury, Giles is putting a considerable talent on hold with the Viking books (I’ve read the Raven series). But what sells, sells, I guess. The third is set up there at the end. We better hope it’s gonna come one day. As I say, if I know GK, he’ll have it in the bag ready for when the readers are done with mead drinking and tales of Vikings. The Burning Land was very good. Brothers’ Fury is incredible. #3? Finish with your Vikings, then let’s camp out on Transworld’s door until they sign off on the third.

You can buy Brothers’ Fury at The Book Depository