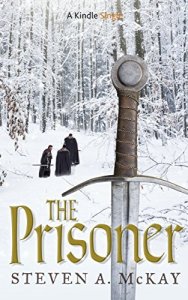 *May be an idea to read all the ‘proper’ Robin Hood novels by Steven, BEFORE you read this. You have been warned.

The Stapleford Prisoner is a delightfully crafted, deceptively simple, thought-provoking and intriguing little glimpse of life in early 13th Century Sherwood, Forest – with a twist. Or rather, an outcome that, while you may well see coming, will still have you smiling with ‘get in you beauty!’ righteousness.

I’m not going to give the plot, it’s very simple, as I said above and I don’t want to spoil your enjoyment. I’ll just say that it’s a warning maybe, not to pre-judge, to see all sides before you come to a decision there’s no going back on. Even set several years after the first of Steven’s Robin Hood stories, it still shows Robin’s sense of justice and fair play for all, is still as straight as an arrow and never dependant on money. You can clearly take the boy out of Sherwood, but you can never take Sherwood out of the boy.

It’s a tale of helping the little man to fight back, and it helps to have Robin Hood at your side. It helps that even several centuries before Mahatma Gandhi, Robin Hood clearly held to the concept of “Even if you are a minority of one, the Truth is the Truth.” With Robin Hood at your side, or on your bookshelf, you can achieve anything, he’ll never let you down.

You can buy The Prisoner now, from Amazon.

One thought on “Review: The Prisoner – Steven A. McKay”