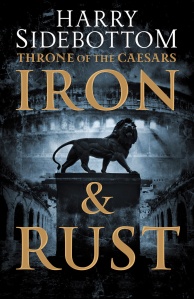 Series: The Throne of the Caesars 1

In a single year, six Emperors will lay claim to the Throne of the Caesars.

Dawn on the Rhine. A surprise attack and the brutal murder of the Emperor Alexander and his mother ends the Severan dynasty and shatters four decades of Roman certainty.

Military hero Maximus Thrax is the first Caesar risen from the barracks. A simple man of steel and violence, he will fight for Rome.

The Senators praise the new Emperor with elaborate oratory, but will any of them accept a Caesar who was once a shepherd boy? And in the streets of the eternal city, others merely pray to escape imperial notice.

In the north, as the merciless war against the barbarians consumes men and treasure, rebellion and personal tragedy drive Maximus to desperate extremes, bloody revenge and the borders of sanity.

Iron & Rust, the first book in a major new series, creates a world both sophisticated and brutal, yet firmly rooted in history; a world of intrigue, murder, passion and war, a world where men will kill to sit on the Throne of the Caesars.

There was a distinct running out of steam feeling going on in the last couple of Fire in the East books, so Harry has shifted direction, more Europe-based, Northern Europe mainly (OK, that’s where Ballista was from and ended up, but only on his return home at the end).

Rome is in turmoil Part XXVIII, etc… But six Emperors?! That’s a lot of Emperors and a lot of explaining to be done for us part-time Romanologists. Some, I’ve picked up through reading other books set in Roman Times, a lot of what is here is new to me. And practically meaningless. My other problem was that I started ‘reading’ this on audiobook. The reader wasn’t, in my opinion, very good for this type of book. Not quite as OTT god-awful terrible as the person doing the Giles Kristian God of Vengeance, or whatever it was, but not right. I couldn’t grasp much of what it was on about and so, to try and play fair with Harry, I switched to reading words on paper. Much better. Well, kind of.

There is, as said, too much background information, not enough foreground events. Much that could have been left to be explained in the following books. Some writers can do it, others struggle. Here’ he’s seemingly trying to cram everything in this first volume. Maybe to get it out of the way for the other two? So they don’t get all bogged-down? Maybe. Let’s hope so.

It all meant that it felt like it couldn’t really find a sense of purpose. Like it went through all the background stuff – about everything, not just characters – until it found something to latch on to and tell a story. Finally, it discovers some Roman Emperor who takes over, has the ‘purple’ thrust on him, and seems able to get on with it. From then on, maybe tow thirds in, it improvers significantly. Uses the interest I have for the end of the Roman era and becomes almost seductive in it’s attraction.

So, finally, it all seemed to begin to form, to be much more interesting and raise itself up to become an interesting look at yet another, to be fair, the final, turbulent period in Roman history.

However, I can’t really imagine this one, this series, flying off the shelves just yet. The next two had better be spectacular for that to happen.

You can buy Iron & Rust at Booksplea.se