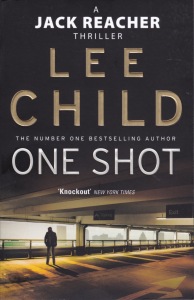 Six shots. Five dead.
A heartland city thrown into terror.
But within hours the cops have it solved.
A slam-dunk case. Apart from one thing.
The accused gunman refuses to talk except for one phrase:
Get Jack Reacher for me.
Reacher lives off the grid. He’s not looking for trouble. But sometimes trouble looks for him. What could connect the ex-military cop to this psychopathic killer? 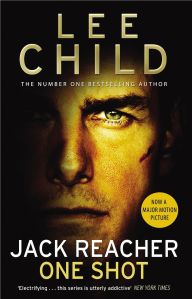 I’m thinking, if you’ve read this far with your Jack Reacher, you’ve also most likely seen the film that is based on this book. Either before reading it, as me, or after you’ve read it. That’s more than likely to affect your opinion one way or the other. Everyone who has read the book and seen the film, is going to have an opinion which is better. There’s no such opinion in my view, as ‘don’t know.’ What did I think? Well, I thought the film was good, I read the book after seeing the film and I thought the book was probably better. But they are different animals and the film does alter several parts of the plot from the book and you can see why, given the time constraints for film. The book probably wins by a short head, mainly because it can go in a little deeper to the plot and the reasoning, all of which is well done indeed.

The film did change, as I said, a fair few things. I remember reading at the time, when it became known that Tom Cruise was going to play Jack Reacher, Reacher’s height. Physical descriptions of Reacher have largely been absent from the first few volumes, but LC is increasingly describing him these days (I’m reading them in order, this is where I am now). Mainly, pretty much always, from the neck down, as far as I can remember. That gives scope for Tom Cruise to play him of course, but the height, that’s something else. It’s not made much of in the film of this book, but he does use his height in other books and I’m presuming they’ll not film them.

It’s perhaps the most complete and satisfying of the Reacher books so far as well. Which may be why they filmed it. We’re still in the middle of nowhere USA though, so of course, pretty much anything goes. I do wish thriller writers would base their books more in reality than nowhere USA. I could populate that kind of fictional town with all the characters you’re going to find there. And I clean toilets in a hospital! However, there’s not too much padding this time out. He’s still writing housebricks for housebrick-sake, but there’s more content in the housebrick these days.

I purposely bought the version right at the top there, as I want to collect the set, cover-wise, and the film tie-in doesn’t fit, in my view. If you click on the Tom Cruise cover, you’ll go to a link to buy that version. OK?

You can buy One Shot, at Booksplea.se