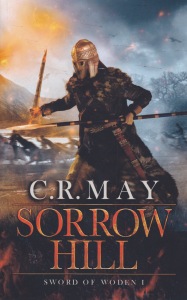 Geatland in the first decades of the sixth century is an island of peace amid the upheaval which marked the death throws of the Roman Empire in the West. Under the benevolent rule of King Hrethel and his sons, the king’s grandson is carefully groomed by the family in the skills and duties of the warrior elite.

As beowulf reaches adulthood a death suddenly tears the dynasty apart. Sensing weakness, the Geats’ most feared enemy appears on their northern border and Beowulf must fight his first desperate battle to save the kingdom…

Sorrow Hill is the first in a trilogy* of novels which seek to unravel the threads contained within the original poem, by recounting the early life story of Beowulf and his family.

Beowulf is the story of a legendary English hero. Except it isn’t. Beowulf is actually a tale about a Geat warrior who lived in Scandinavia, in what is now southern Sweden, in the 6th Century, or perhaps earlier. The story was told in and the earliest example we have (left) is written in, Old English. It comes from the period after the Romans had left Britannia and the Anglo Saxon migrations from northern Germany, southern Scandinavia, had begun. Maybe there was a need for an epic tale to warm the hearths of their new country and remind them of where they had come from.

Beowulf is the story of a legendary warrior who goes to help the beleaguered Danish King Hrothgar, whose hall is being plagued by attacks from the (equally) legendary monster Grendel. Put simply, like the best tales, it is the triumph of good over evil. If that sounds too Christian for you, then I should refer you to the ‘discussion’ there has been as whether Beowulf should be regarded as a “pagan work with “Christian colouring” added by scribes or as a “Christian historical novel, with selected bits of paganism deliberately laid on as ‘local colour.'” As Margaret E. Goldsmith says in “The Christian Theme of Beowulf.”

Using that reference to ‘historical novel’ (even if it is a poem), as a link, we finally get to the business at hand…

Now, the 6th Century is, of course, officially, A Very Long Time Ago and while the poem is written in Old English and that is an English that you and I would have trouble recognising as such, spoken or written (and, it’s a poem!), think youth, think! If you are English, or your mother tongue is English – this is your history. This is where you come from.

So the good Mr May has re-imagined Beowulf, or imagined totally Beowulf’s pre-Beowulf period. What was Beowulf’s background? Where, as in the society, did he come from? What made him into the hero Beowulf.

In Sorrow Hill, we go back before the poem and begin in Beowulf’s childhood and his later formative years in Geatland and Denmark. We follow his excursions to other lands as an ambassador of sorts, on behalf of his father, the King, and due to the Scandinavian tradition of fostering sons to other families, Beowulf starts forming the cunning, the strength and the friendships that will (eventually) lead to the events in the poem. In two more books time, according to Mr May.

I knew the bare bones of the Beowulf legend, thanks to the really rather wonderful Matthew Harffy (all too) short story of last year and thanks to school – rather than the more recent quite dreadful (you know it) film. Saw the trailer. Saw Angelina Jolie. Passed. However…with Sorrow Hill, I was captured, book (!), line and sinker, from the start, from page one. Mr May writes in such a way that it is physically impossible not to be transported back in time on a glorious wave of wonderful imagery and undoubted sympathy for the characters and the period, that simply oozes from every word. It really is quite stunning to realise then, that this was Mr May’s first book! There is absolutely none of the first book syndrome. No short sentences. No style over content. No roadblocks and sudden stops. No unexplained, outside the writer’s mind at the time, changes of direction. Yes, if he wasn’t such and all around Mr Nice Guy, the absurdly talented Mr May could become irritating.

Mr May makes the period his own from the first word. Which should have been “Wait!” Or “What?!” as would have had it. And when you’ve made the period your own, brought it to living, breathing, vibrant life, who is to say it couldn’t have been like this?

If you’ve heard of Beowulf, even if you haven’t, you need to read this book. I need to read the second and third (*and suggesting the mention of ‘trilogy’ on the back blurb there may have been a bit hasty) number four, that’s for Beowulfing sure!

You can buy Sorrow Hill from Amazon, here