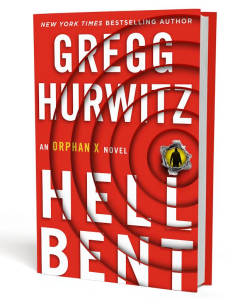 From the cover of the ARC*:
Evan Smoak  – Government assassin gone rogue – returns in Hellbent, and engrossing unputdownable thriller from Gregg Hurwitz, the latest in his #1 international best selling Orphan X series.

Taken from a group home at age twelve, Evan Smoak was raised and trained as an off-the-books Government assassin: Orphan X. After he broke with the Orphan programme, Evan disappeared and re-invented himself as The Nowhere Man, a man spoken about only in whispers and dedicated to helping the truly desperate.

But this time, the voice on the other end is Jack Johns, the man who raised and trained him, the only father Evan has ever known. Secret Government forces are busy trying to scrub the remaining assets and traces of the Orphan Programme and they have finally tracked down Jack. With little time remaining, Jack gives Evan his last assignment: find and protect his last project and recruit for the programme.

But Evan isn’t the only one after this last Orphan – the new head of the Orphan programme, Van Sciver, is mustering all the assets at his disposal, to take out both Evan (Orphan X) and the target he is trying to protect.”

Gregg Hurwitz has really created pretty much the perfect vehicle for the perfect modern thriller. I can’t think of a thing wrong with the whole scenario and certainly not in Hellbent. Strong characters, solid background, barely a word put wrong, masses of potential for now and the future. In fact, there are so many ideas and potential going on here, there’s enough for three books, if he wanted to spin off in other angles.

Hellbent is both a development of the character and scenario and an improvement on the first two (Orphan X and The Nowhere Man). Hellbent is the result of the first two and the series getting going at top speed. Evan S has had to put the helping other people bit on the back burner a bit. Infact, when someone rings and it looks like he might have to go and sort the day job out, I started getting quite annoyed, the plot is so good.

The only thing Gregg H has got going against him and it’s absolutely not his fault of course – the whole ‘secret government programme scenario.’ A few years ago, more under Bush 2 and earier, you’d have gone along with it without thinking or blinking. Now…I’m not so sure. It’s a problem that’s going to infect all thriller writers writing today I’m afraid. It’s maybe not insurmountable, but if I were a thriller writer – and could afford it – I’d consider going into hibernation for a couple of years (dear god, not longer!).

I’ve seen somewhere, that Gregg H’s contract for these Orphan X books, is five. I can see already, how that could pan out. My heart says I’d like to be reading as many Orphan X as there are Bourne books (the next Bourne, will be number fifteen), I’m sure GH could maintain the quality over that length of series. My head though, says maybe five times perfection is enough.