In the remote Aleutian Islands, a cunning Russian plot is unfolding: a covert team is attempting to steal top-secret, next-generation technology from the United States. Logan West, not part of the FBI’s Joint Terrorism Task Force Abel, is sent to investigate the potential breach, along with his right-hand man, John Quick. The resulting violent confrontation triggers a global search for the stolen secrets and threatens to pit the US against China in a looming shadow war. Logan and John, joined by the chief of the CIA’s Special Ops Group, Cole Matthews – battle their way through Europe and across Sudan to restore international security. Meanwhile back in the States, FBI Deputy Director Mike Benson faces and imminent threat that may also be part of the deadly global threat.

The one in which he goes too ‘big.’

Only two books in, and Matthew Betley has us struggling to believe that his recovering alcoholic hero is both called Logan West, and has had his Police record exude an amnesia cloud, allowing him to be set on the FBI. Not as a door-knocking “have you seen this man?” type either. He’s on first name terms with the top Feeb brass, and involved in global conspiracies involving the Russians and the Chinese. It’s all a bit of a stretch, both for the character and for us reading it. 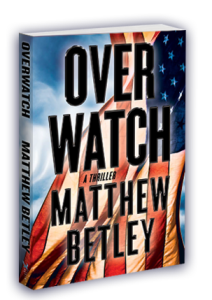 It’s not badly written, it is at least, while sharing many of the same elements, better reading than a(ny) Clive Cussler book. It does boil away at a furiously breakneck pace, never a still moment and, if this is the sort of thing that rings your bell, you absolutely get your money’s worth. It’s just that I was just expecting more after the promising first book, Overwatch. I expected the story, character and writing to progress, but not this way. It doesn’t come as a surprise actually – as the global conspiracy and only one man can save us all kind of thing is a trend amongst American Thriller writers –  more a disappointment. There were a lot of other good things he could have done with the character. He needed to keep the action ‘small’ and tight, close-in and based around the Logan West character. Less James Bond, more Jack Reacher. More on the how do I get out of this, and less on the Global Conspiracy. It doesn’t work for James Bond-believability and it doesn’t work here.

On the plus side – Europe gets a large proportion of the action. Because, as I’ve mentioned before, if you’re American, anything goes there/here. Sudan hardly ever features in American thrillers (can’t recall too many trips to Sudan in UK thrillers either for that matter). The pal-buddy-mate thing with this John Quick looks promising too. I’ll buy and read the next one, still based on the glow from Overwatch, but he needs to tighten up. A Thriller can be thrilling even if it just spans the city, it doesn’t always need to span the globe. In fact, I’d rather they didn’t.

You can buy Oath of Honour from The Book Depository