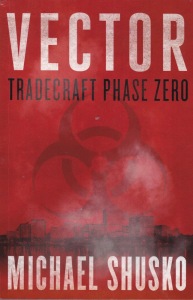 When researcher Jawad Khattib gasps his last breath on the Massachusetts General Hospital floor, the Department of Homeland Security wants answers – especially after a preliminary autopsy suggests he died of radiation poisoning. What exactly was Khattib working on? And who was he working for?

DHS Agent Lee Jansen is rushed to Boston and paired with expert toxicologist Dr. Emma Hess, to crack the case. All evidence points to the creation of a dirty bomb, but the clues seem too clean, too obvious. During the course of their investigation, they discover the horrible truth. This new weapon is far more deadly than anyone had expected. It isn’t just capable of killing hundreds – it’s capable of killing hundreds of thousands. Can they stop what’s been set in motion by a madman with a dangerous secret before it’s too late?

I thoroughly enjoyed this fast paced, bang-up-to-date nerve-tingling thriller. A scenario where a dirty bomb would be the preferable option, eh?! The less terrible option and, I’d say, they’re surely playing it down with the ‘hundreds of thousands’ – hundreds of millions would be potentially nearer the mark. Once you read it, you’ll see. I was thinking that all the ins and outs of genetics and chemicals, and all the nasty stuff that the ‘bomb’ in question can, or might, leave me cold, but no. I found that the explanations of the whats and the whys was, while necessarily technical, relatively easy to take in and understand. There’s a feeling of substance to the book, rather than flash, as this kind of thing has in many other main-stream thrillers out there, clearly Michael S knows his onions and whilst he wants to put across that his premise for the book is sound, he’s not beating you about the head with it. There are some interesting other characters, out side what I guess are meant to be the main two: DHS Agent Lee Jansen and toxicologist Dr. Emma Hess. They’re a good double act, brains and brawn, with it not being obvious as to who is the lead – so it’s not a one-man show, as Vince Flynn and Brad Thor are always, and to their detriment sometimes, I feel.

As for the technology on show here, both from the investigators and especially from the perpetrators, some of it does sound (as my friend’s Dad used to say about shit from China) far-fetched. However, I’m most certainly behind the curve here, as are most of us are, and it is difficult therefore, to say it wouldn’t/couldn’t happen. I think of this sometimes, when trying to get my head round what might happen in the near future: when my grandmother was born, Orville and Wilbur Wright yet to make their 12 second manned flight. Before she died, she saw live television pictures of a man walking on the mood. So, whilst Vector may be plausible theory, who is to say it couldn’t soon come true? Not me.

I’ll admit I wasn’t really convinced by the love story – no prizes for guessing who between… It felt a bit like someone thought it should be there, rather than feeling naturally developed. I wasn’t keen on the name for the leader behind the proposed perpetrators; The Architect. Mainly the name, too James Bond/Dan Brown. Shadowy multi-millionaire, part of even shadowy international group, yes. The Architect, no. The organisation he has together, and their aims and fanaticism, I could see working, with fanatical believers, like Ira Levin’s The Boys From Brazil, for instance. When he’s revealed as a ‘real’ person, as it were, where we experience him with his real name, it works much better.

Finally, I don’t think all the titles work. It’s confusing. I’m not really sure if the book is called Vector or Tradecraft, or Phase Zero. Or if this is the first in the Tradecraft series. It’s partly a design problem, partly an author problem, he may well have got too ‘close’ and hasn’t stepped back to view it through his buyer’s eyes. It’s not a deal-breaker, because the story is strong enough. But you only find that out once you’ve bought the book and I fear a lot of potential buyers may not buy it, because the can’t figure out what it’s called.

All in all though, a thoroughly entertaining, believable thriller. And there already it’s well ahead of the last Dan Brown I saw at the flicks, and the last Mitch Rapp, or Logan West. Paced well, written well and keeping the attention to the end. If he can either sort out the titles, or design, the rest of the series will be a must read for me.

You can buy Vector Tradecraft Phase Zero from Amazon