In AD 922, Ibn Fadlan, the representative of the ruler of Baghdad, City of Peace, crosses the Caspian Sea and journeys up the valley of the Volga on a mission to the Kings of Saqaliba. Before he arrives, he meets with Buliwyf, a powerful Viking Chieftan who is summoned by his beseiged relatives to the north. Buliwyf must return to Scandinavia and save his countrymen and family from the monsters of the mist.

‘Eaters of the Dead,’ is a stunning adventure in the tradition of Beowulf, taking the reader to a mysterious land, where the day’s length does not equal the night’s…where after sunset, the sky burns in streaks of colour…Where Buliwyf and his band of brothers must lock in mortal combat with the dark, hairy brutes who threaten to empty the land.

The film The 13th Warrior was, as I’m sure you are aware, absolutely superb. A classic Viking film and one of those to take on a desert island. As long as the desert island had electricity, plugs, and you had a BluRay player and a tv…anyway, it is absolutely essential viewing for anyone considering themselves anything of a Viking aficionado. I knew it was based on a book by Michael Crichton called Eaters of the Dead, and thought nothing much more, other than I had to read that book one day. Which I have now done. So then, imagine my surprise when – as clearly the last person on the planet to find out, or realise –  the book on which the film is based, actually mixes in Ibn Fadlan’s manuscript with the legendary poem Beowulf! Well, bugger me sideways!

If you do know the bones of the Beowulf story – that’s me – then you will, as I did, recognise the elements Michael Crichton uses here. According to the man himself, the first three chapters of the book use Ibn Fadlan’s manuscript, then we’re into a re-telling of the important bits of Beowulf. The book is more than just the basis for the film, it’s written as though it is all by Ibn Fadlan, who travels with the warriors back to Scandinavia and takes an active part in their adventure there.

The Beowulf element that develops as the Vikings receive an important message from Scandinavia, calling on them to return ‘home.’ But they need Ibn Fadlan to make up the war party, as the Soothsayer has determined that there must be thirteen warriors making the trip back and that one warrior must not be a Norseman. So Ibn Fadlan is roped in as the 13th Warrior. It is then a stripped down, imagined version of the Beowulf legend, as Michael Crichton set out to make it. A sort of ‘to explain the original events that might have become over time and retelling, the Beowulf legend as we have it today, it might have happened this way.’ The main themes though are all present. The warrior called to help fight an unimaginable evil, finally confronting the mother of all mist monsters herself. Beowulf is a classic us against them story. Insiders against outsiders. In the Viking period, where everyone was together in Longhouses for both comfort, safety and warmth and tales were told of creatures than moved, unseen or half-glimpsed out in the forests and the dark, inside the Longhouse at

night, against outside the Longhouse at night. Inside, in the light, was the good, outside in the dark and mist and unknown, was bad. The mist monsters of Michael Crichton’s legend, we don’t really need him to tell us, represent the last vestiges of Neanderthal man, pushed to the edges of the Vikings and Homo Sapiens world, kept to themselves. Michael Crichton posits that they could have survived into recored history and were misunderstood and therefore feared. The Vikings fear of them is really Xenophobia, though that is in stark contrast to their acceptance, both in Ibn Fadlan’s original manuscript and here in Eaters of the Dead, of Muslims and Muslim culture. The only anti-Muslim comments aren’t really anti- at all. “How silly!” is about as far as the Vikings go when presented with a view that is different to theirs’. 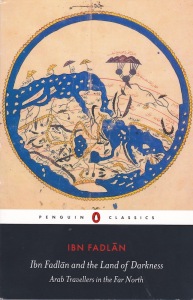 Ibn Fadlan was actually Ahmed Ibn Fadlan (In Arabic: أحمد بن فضلان بن العباس بن راشد بن حماد Aḥmad ibn Faḍlān ibn al-ʿAbbās ibn Rāšid ibn Ḥammād, 921–22) and was sent out to report on the peoples of the areas in the far north of the Muslim consciousness, by the Abbasid Caliph, Al-Muqtadir. The report he compiled on his travels and observations of the Bulgars, Khazars and the Rus’, is called The Risala. I have a Penguin Classics version which is a factual work based around his manuscripts – or copies and versions included in other works, because, as is frustratingly common, the original is now lost. I haven’t read that yet, so I’m afraid I can’t give you a comparison just yet.

The Michael Crichton book here, is written – he says – in the style of Ahmed IF, to appear as if it is a complete, contemporary document of his travels to the meeting with the Viking Rus’ and onwards – or backwards – with them to confront the title’s eaters of the dead. On that front, it to me works very well indeed, he has accomplished his aim. The annotations especially had me fooled, before I got to the afterword… I was captured and absolutely hooked by the book, helped no doubt by my regard for the film and trying to imagine the film while reading the book. I raced through it, footnotes and all, in just a couple of days. My only regret being it wasn’t twice as long. That said, it isn’t a post-film dramatisation or a version they filmed from. Though if you have seen the film, you’ll know where you are with the book. What the book does, better than the film, is retain the sense of the Viking warriors Ahmed Ibn Fadlan met.

They were shockingly different to him at the time and really should still be to us. Nowadays though, our idea of what the Vikings were like, is rather a rather safe one, with many of their sharp cultural contemporary differences softened. Michael Crichton keeps the feeling of awe, often shock, Ahmed must have felt and preserves something of the strangeness the Vikings were even to their own contemporaries. The film, no less fantastic, but maybe due to its rocky path to completion, does fudge some elements – though never goes full Tony Curtis, Kirk Douglas, Ernest Borgnine “ODINNNNN!” Vikings on us.

The regard historians have for Ahmed Ibn Fadlan, is because his is the first, and if I’m not much mistaken, the only contemporary account of an aspect of Viking culture we have. ‘Have found so far,’ as I live in hope of ‘them’ finding others. Where this is different to other contemporary accounts of the Vikings, for those of you mithering “just a moment, what about “save us from the fury of the Northmen” and similar?” Well, problem for us is that they pretty much only consist of “oh lord God, we have sinned and we deserve this punishment, but send more firey dragons!” or were written many years after any content, for a specific purpose. To scare the non-believers mostly. The point with Ahmed Ibn Fadlan’s text is it is un-biased, non-judgemental (on the whole) observations of what he saw. Which is what his patron required of him. The famous parts of his texts are the only contemporary account of a Viking ship ‘burial,’ descriptions of their washing habits and their physique we have. As Michael Crichton says, it can’t follow actually chronologically on from Ahmed’s encounter, as the Beowulf legend is much, much older. But in Eaters of the Dead there are no such problems and it all works splendidly well. As well as any scholar might hope to discover one day written in a contemporary manuscript.

You can – and should at the earliest opportunity – buy Eaters of the Dead at Booksplea.se

While you’re here, why not check out the (probably) unique SPEESH READS PINTEREST BOARD FOR MICHAEL CRICHTON’S EATERS OF THE DEAD. Plenty of pictures and links and stuff. Lots of stuff.