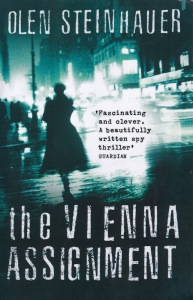 I thoroughly enjoyed this one. I’ve previously read The Tourist, which was also excellent, though probably more of a mainstream spy novel.

The Vienna Assignment is particularly good because it doesn’t do, as in the main character doesn’t do, what you probably expect it/him to. At least, that’s how I felt anyway.

It’s set in Eastern Europe – and, as Vienna and Austria are in Western Europe – Western Europe, in the mid-sixties. It’s about spies, about Socialism about suspicion and trust, betrayal and idealism when all the evidence points against it.

Atmospheric, intriguing and thought-provoking. Read it, you won’t be disappointed.

You can buy The Vienna Assignment from Amazon